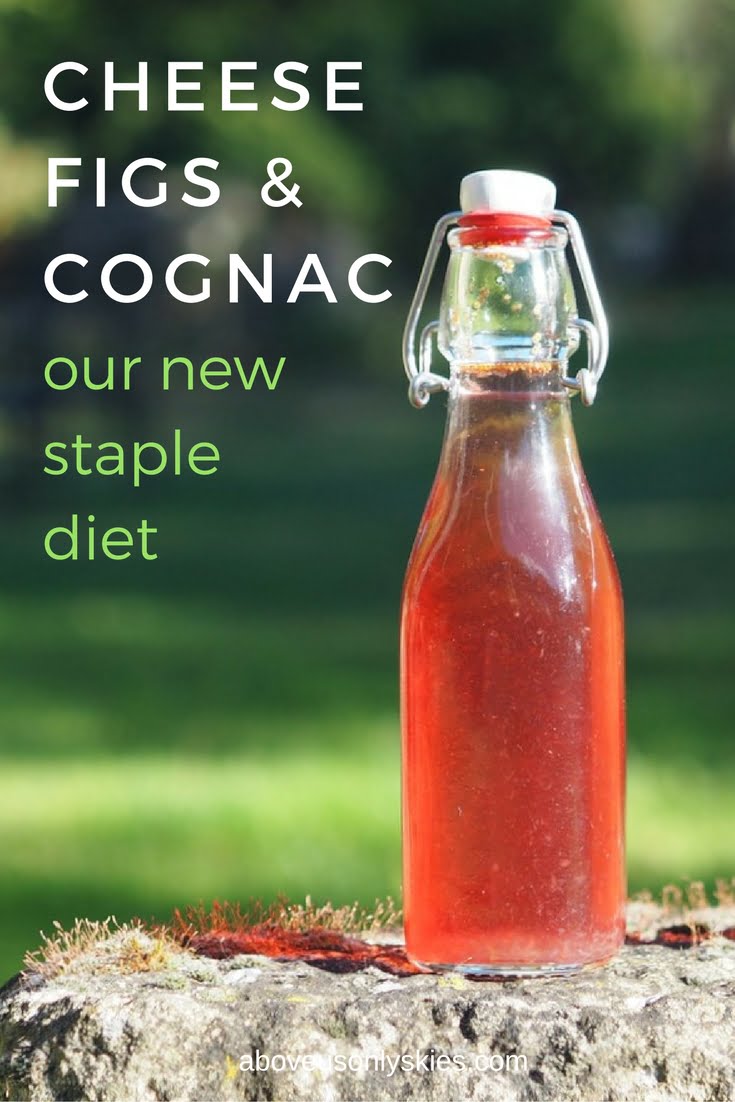 Long-term Above Us Only Skies readers will have come to realise that we love our food. And it might have slipped out once or twice that we enjoy the occasional beverage, too. So, during our six-month house sitting in France, any prospects for alcoholic abstinence and healthy eating were about as likely as a Donald Trump apology.

We’ve tried. We really have. But, confronted with bountiful supplies of fresh bread, rows upon rows of wine (99% of which is French, obviously) and enough cheese to sink The Titanic twice over, we’ve surrendered to the inevitable and jumped straight in.

It started with the cheese.

As Brits, we’re quite proud of our cheese heritage. In fact, I remember having a heated debate with a French traveller once over the relative merits of cheese from either side of the English Channel. And he was pretty dismissive of my claims to British superiority. Turns out he might have been right.

First of all, the choice is bewildering. Secondly, the smells that emanate from the market cheese counter or supermarket deli are to die for. And thirdly, I haven’t tasted anything to compare with a salty, tangy and creamy slab of blue Roquefort Papillon.

Of course, there’s a law written somewhere that says you can’t eat cheese without an accompanying glass of wine (and the word glass is interchangeable with bottle for the purpose of this article). Now I’m no expert on French wine. But I’ve always felt it’s a bit over-rated and over-priced when compared to similarly priced wine from, say Italy or Argentina. And I’m talking less than 10 euros a bottle here.

However, what I’ve always been 100% sure about is marrying red wine with cheese. So in we marched to a Dordogne wine merchant and asked the assistant to recommend a bottle of red (under 10 euros, of course) to go with our just-purchased selection of cheese. She barely managed to stifle a giggle as she pointed out that in France, white wine is considered the go-to cheese partner. So, our minds nourished with this newly acquired information, we had no choice but to pick two bottles – a red Malbec from Cahors and a white Viognier. Winner! 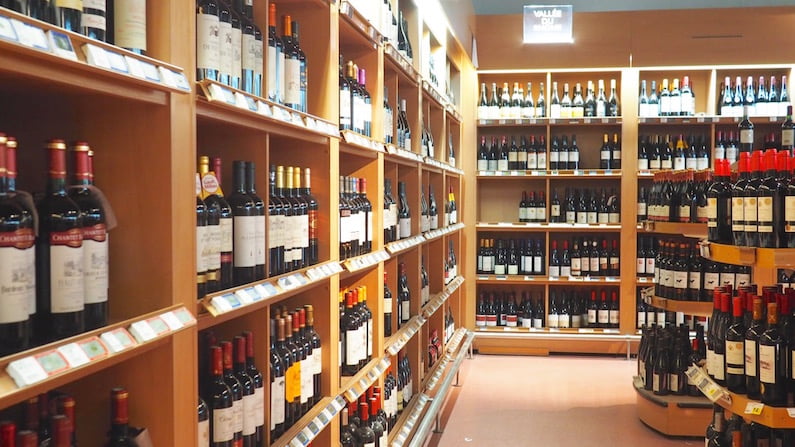 Now, I might be a few grapes short of a full bunch when it comes to my knowledge of wines. But I’m not much better when it comes to another of France’s revered tipples – Cognac. I remember visiting the House of Remy Martin in the town of Cognac many years ago and have always thought its VSOP and XO as being the best you can buy (without spending hundreds of euros). Turns out I might have been wrong once again.

We got a tip from an English guy who told us about Jean Balluet, a tiny producer in Neuvicq-le-Château. He told us that their signature 40-year-old cognac wiped the floor with anything that Remy Martin or its big rivals could manage. So, in the great tradition of investigative journalism, we decided to go and found out for ourselves.

A family business since 1845, it’s about as understated as you could imagine. In fact, we barely noticed it was there as we drove back and forth along the empty village street it’s situated on. Eventually, we discovered the small nameplate on the front door, which was the only piece of branding around.

After a cursory ring of the doorbell we were greeted by a lady who introduced herself as Monsieur Balluet’s neighbour. And, as he was away for the day she would stand in to take us on a tour of the cellars. So, off we went through rooms full of cobweb-covered oak barrels that smelled of warm caramel, aged wood and grapes. Sublime. 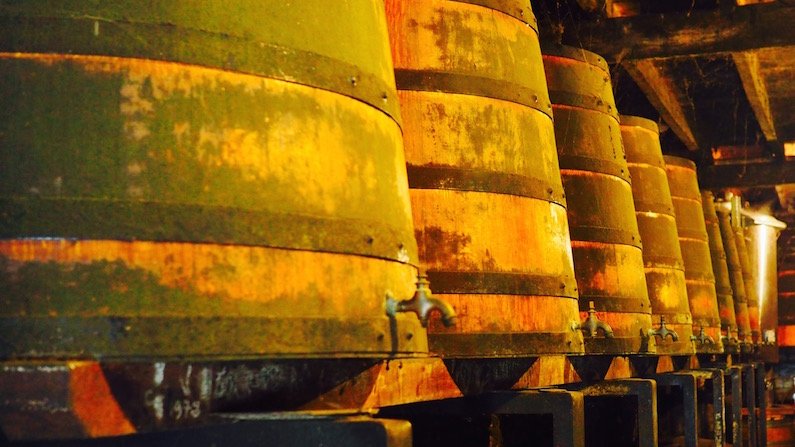 We finished with a free tasting back in the office. Unfortunately, this being France, everything closes down for lunch at 12 noon and doesn’t reopen until 2. No exceptions. No bending the rules. And, as it was now 11:55 it meant that we had some serious time-bound supping to get through. As always we were up for the challenge.

Our aperitif was the Pineau-Charente, a kind of fortified wine that’s a speciality of the area, and a favourite of Nicky’s. A bit too sweet for my liking but that didn’t stop Nicky buying a couple of bottles.

Then it was on to the six-year-old cognac. “Just for cooking” commented our host. Tasted good to us but we were eager to get on to the serious stuff.

The 20-year-old cognac was next. It was smooth, lush and possibly the greatest mouthful of fermented or distilled grape juice I’ve ever tasted.

And, as the clock approached noon it was time for the 40-year-old. An altogether different beast this and one to be savoured. So, I’m not sure if knocking it back in one is how it’s supposed to be appreciated but when the pressure of time is on….

Predictably we bought a bottle of the 20 and 40-year-olds to go with the Pineau-Charentes. And when we noticed the half bottles of “sparkling cognac” – a mixture of brandy and champagne – we added a couple of those into our shopping bag, too. Nothing whatsoever to do with the effect of the tastings, you understand. 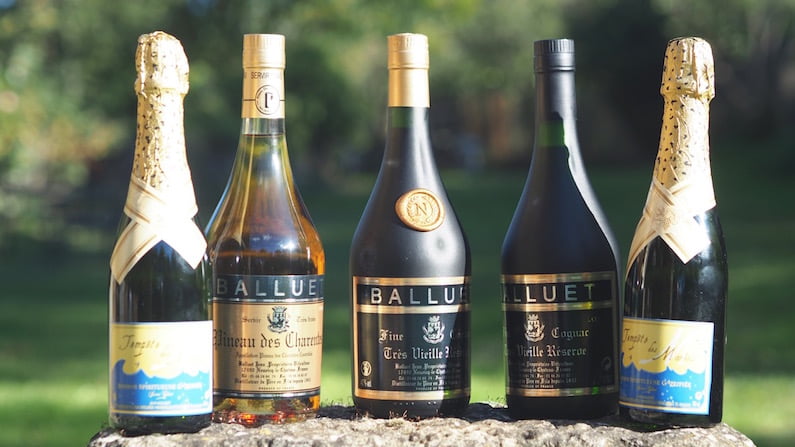 Spurred on by the almost cottage industry scale of Jean Balluet’s output, we thought it would be a worthwhile social experiment to invent our own alcoholic drink using the natural resources of the French countryside. But, without the luxury of a 40-year maturation period, we had to find something that could be produced in less than a week.

As luck would have it, our Dordogne house sit provided the perfect raw material – the mighty fig. With three figs trees in his garden, our host was only too happy to let us gorge ourselves on whatever we could harvest. So, armed with as many bowls as we could carry we took him at his word and set about collecting the biggest haul of figs since The Great Fig Bonanza of 1873 (that bit might have been made up).

And what could we possibly do with all that fruit?  Well, buy a couple of bottles of cheap vodka to start with… 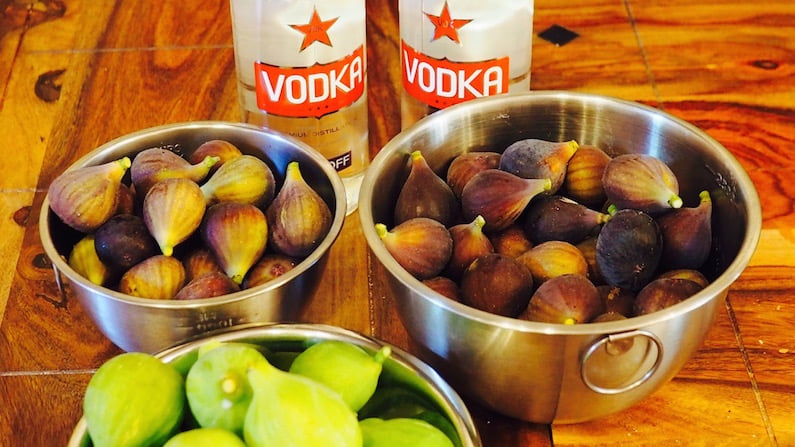 Then, slice the figs in half, add them to a storage jar filled with the vodka and leave to macerate for five days… 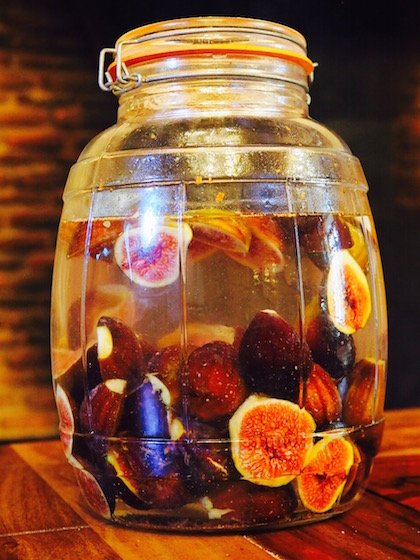 And finally, decant into bottles before serving with tonic water and ice. Plus a further slice of fig for the ultimate summer afternoon drink! 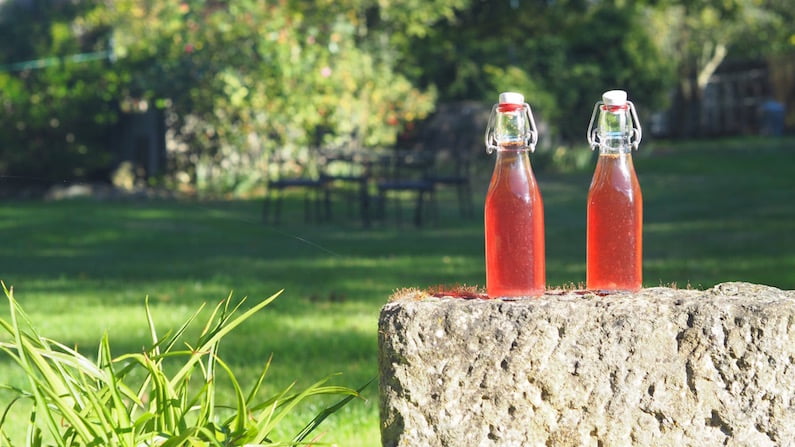 “Now hang on a minute!” I can almost hear you cry. “I didn’t expect to come to one of your French blog posts and be bombarded with boozy recipes, fatty food and poncy fortified grape juice. What about the chateaux, the art galleries and the interminable four-hour lunch extravaganzas?”

Well, there’s a time and place for everything, as someone undoubtedly once said. For now, we’re acclimatising to our post-Brexit-vote, cross-Channel existence while trying to figure out exactly what it is we’re going to do next.

And, if consuming our combined body weight in cheese, figs and Cognac helps to provide us with the clarity we need then, in the words of my loving wife and co-traveller, “You pour the brandy, I’ll sort out the Roquefort”.