8 THINGS THAT WILL SURPRISE BRITS ABOUT THE USA 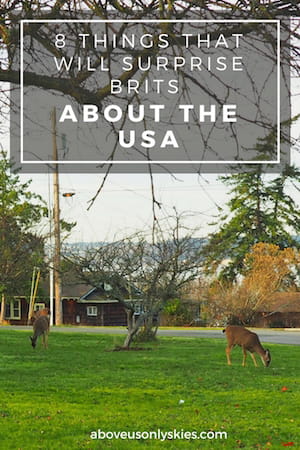 We’ve been housesitting in the USA for four weeks now and we kind of feel like we’ve settled into something of a typical USA lifestyle. Sure, we’re high up in the Pacific North West and life around here isn’t necessarily typical of the rest of the country. But we’re loving the laidback, welcoming attitude of the Anacortes locals, the almost-British weather, and the proximity of so many craft beer breweries.

Of course, at the same time, we’ve managed to maintain a certain amount of true British decorum. We’re still apologising for pushing our Safeway shopping trolley within three metres (or “yards” as they still like to call them here) of the nearest shopper. We regularly look for bargains in the “out of date” aisle. And we’ve given up trying to explain to the aforementioned supermarket’s butcher that bacon as we know it usually comes complete with at least a modicum of meat. Unlike the fat-saturated length of heart attack fuel on offer.

Indeed, despite our two countries’ “special relationship”, there are plenty of cultural differences that are joyfully on full display every day. And so we thought we’d celebrate our gradual integration into the American way of life by reflecting on eight things we’ve learned about the USA and how it REALLY differs from the UK…

Politics in the UK is not an especially exciting affair. Politicians politely disagree with gay abandon. Live TV debates are conducted with minimal fuss (apart from the occasional outburst from some nutter in the audience). And, if we’re lucky, at least a third of the population actually turn out to vote in an election.

American politics, in comparison, resembles a reality TV version of Game Of Thrones. Nothing appears to be sacred. Especially the truth.

And with wall-to-wall cable TV coverage, there’s enough entertainment to convert any passing onlooker into a full-time political junkie.

As if to emphasise the contrast, during a recent election a Republican candidate strode into the headlines by arriving at his polling station on horseback. To be fair, Roy Moore had made enough headlines already with his controversial backstory, but it left me scratching my head for a British example of a striking entrance to compare with.

In the end, all my mind could muster was the sight of Foreign Secretary Boris Johnson ziplining his way into London’s Victoria Park. Which is an image we could all do with forgetting, to be honest.

There’s a TV ad doing the rounds at the moment offering a “carryout insurance” on pizzas collected from Domino’s. So, after you’ve picked up your thick crust pepperoni and somehow manage to trip over your neighbour’s dog on the way back to your house, thus spilling your dinner into the winter snow, then said insurance will entitle you to a replacement. No questions asked. As long as you return within two hours. Your visit to the hospital will just have to wait.

I’ve checked and Domino’s are most definitely not offering this in the UK. Even though they’re charging about three times the amount for the same pizza. Maybe we’re just made of sterner stuff.

In fact, from where I come from, a sprinkling of snow on your pizza is considered an additional natural ingredient.

3. The Skagit Arms is not actually a pub

A day after arriving in the US our host took me out for a drive just to show me around.

Anyway, on the way back he asked me if I fancied a beer. My wordless answer was obviously writ large across my face and so, at the sight of The Skagit Arms just off the highway, we pulled up in anticipation of tasting one or two of Washington’s famed craft beers.

But after skipping across the car park and opening the hostelry’s door it immediately became apparent that all was not what it seemed. The first clue to our howler of an error was the row of rifles behind a counter fronted by a man who was most definitely not in any mood to serve us a couple of local IPAs.

The second was the sight of a customer looking down the barrel of a Smith and Wesson. The last time I’d seen someone handling anything similar he was standing about three metres away from a coconut on a shelf next to a teddy bear.

Suffice to say, we’ll skip any potential pubs with “Arms” in its name from now on.

4. Every other TV advert is for a prescription drug

The USA is either a nation of hypochondriacs or someone is making a ton of money making medical adverts for TV. More likely due to the fact that it’s one of only two countries that allows Direct-to-Customer advertising for prescription pharmaceuticals (the other is New Zealand). Which does seem rather strange when the country is in the middle of an opioid epidemic.

What’s really struck me is that adverts encourage you to bring the drugs up for discussion with your doctor. Rather than the age-old British tradition of your doctor establishing what you actually need based on his diagnosis.

But what really ratchets up the entertainment factor is the long list of side effects that have to be stated alongside the ad. And there are normally enough to scare off anybody who’s paying attention. As in this classic example…

5. Wildlife can cross the road without the need for the RSPCA to be put on red alert

It’s fair to say that if a group of three deer were caught crossing the road in suburban Britain it’d be treated like a major incident. People would lock themselves in their houses for fear of a stampede. The RSPCA (Royal Society For The Prevention Of Cruelty To Animals) would be on the scene at the earliest opportunity. And the local news channel would be scrambled into position to keep up with the latest on Bambi’s fate.

Over here, it’s just another reason to keep your speed down.

There are about 300,000 deer living in Washington State. And many of them meander in between the edges of forests and onto the manicured suburban lawns. Which means that they occasionally wander onto the roads as they cross from lawn to lawn. As we found out on one of earlier trips into Anacortes…

6. Libraries are as noisy as bars

A library in Britain is a place of quiet calm. Where everyone understands and observes the simplest fact of life. That breaking the silence in a building that’s filled to the rafters with books is punishable by death. Or at least a death stare.

The Americans don’t seem to have grasped this basic truth, however. Yes, there’s the pretence that people should remain relatively quiet. But I’ve grown to learn that Americans don’t do whispering. Neither do they have a great deal of self-awareness when it comes to having a “private” conversation.

So, on our regular visits to Anacortes Public Library (where we take advantage of their free wifi), we’re treated to regular outbursts from people who greet each other like they haven’t met in years. Or ask the librarian what time it closes as if he or she were sat on the opposite side of the building.

Religious advertising in the UK has had its controversies. And no less than the Church of England’s cinema advertisement reciting The Lord’s Prayer, which was banned by three leading cinema chains in 2015.

But the concept of advertising religion in the UK is pretty low profile anyway and is probably a reflection of the fact that just 1.4% of the population in England regularly attend Anglican church services on Sundays.

In the USA, however, it’s a different story. Just flick through the TV channels and you’ll come across a whole host of religious programming.

But what caught my eye this Christmas was a TV advert for a “Wonder Bible” – a miniature audio player that contains an entire spoken-word version of The Bible. Nothing against the product itself – and there’s a definitely a market for it in the US – but the sheer cheesiness of the TV ad was a joy to behold!

Probably the biggest surprise of all has been the almost universally shocking customer service from tech companies we’ve come into contact with – and yes we mean you, AT&T and GoDish.

Not only have we been provided with deals that were nothing like what we asked for and been given advice that’s bordered on wilful misselling, but when we’ve tried to call them to sort things out we’ve been met with complete disdain, rudeness and incompetence.

And there were we thinking before we got here that America was a bastion of exceptional customer service. But when you’re dismissed by the manager of a cellphone store on the basis that he’s got better things to do than to hear your complaints you know it’s time to give up.

Happily, the good folks serving in the bars, restaurants and supermarkets of Anacortes have been nothing short of superb. And who’re already proving to us what a true American welcome and great customer service are all about. 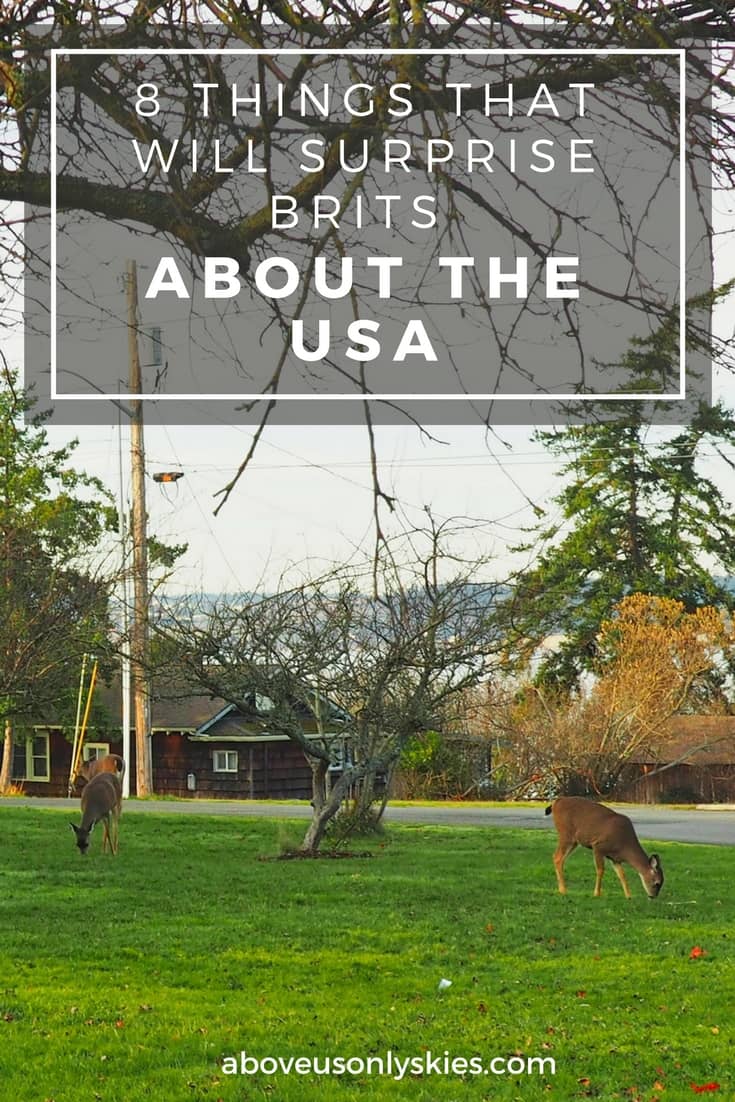 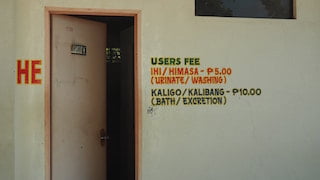 MUSINGS
8 THOUGHT-PROVOKING SIGNS FROM OUR TRAVELS IN ASIA 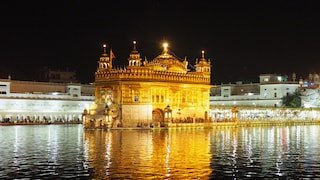 INDIA
4 THINGS YOU MUST DO IN AMRITSAR 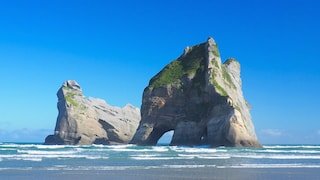