SWIMMING IN A WHALE SHARK WONDERLAND

SWIMMING IN A WHALE SHARK WONDERLAND 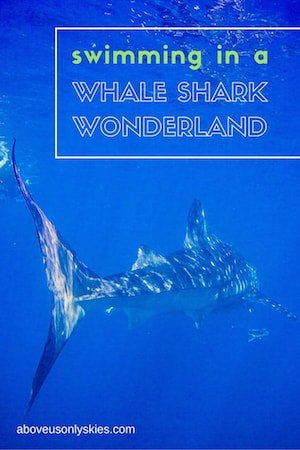 We hadn’t compiled a bucket list when we set off on our Big Trip, but as we’ve progressed there are certain things that we’ve decided we absolutely want to experience. At the very top of the list was to swim with whale sharks. And so, when the opportunity arose for us to travel to Western Australia we just had to make sure we took full advantage.

We headed to the west coast town of Exmouth after seven days of travelling in the Australian outback, looking for some beach time and an encounter with the largest fish in the ocean. We’d pre-booked our “swimming with a whale shark” adventure with Ningaloo Whaleshark Swim for a not inconsiderable sum. But, given its pole position in our bucket list, we were prepared to stretch our budget for the chance to get up close and personal with these gentle giants.

Ningaloo Reef is a UNESCO World Heritage listed site because of its size, biodiversity and it’s unique proximity to 240 km of Australia’s west coast, which bristles with blue skies, green bush, red soil and brilliant white beaches before it topples into an azure blue and turquoise ocean. It also happens to be extremely remote so the coastline here is completely untouched for the most part.

During certain parts of the year, the waters around the reef attract manta rays, dugongs, whale sharks and humpback whales. Our visit coincided with the annual migration of humpback whales on their way north from the Antarctic, and whale sharks, which congregate in the Ningaloo Marine Park between March and August.

And, sure enough, within 30 minutes of setting off on our boat jetty, we were treated to show after show of humpback whales gliding in and out of the water, their tails gracefully rising behind them before disappearing back below the water, almost in slow motion. Incredibly they were doing this merely 10 metres or so from the boat – we would have been happy watching them from an elevated point on land but seeing them this close was just extraordinary. 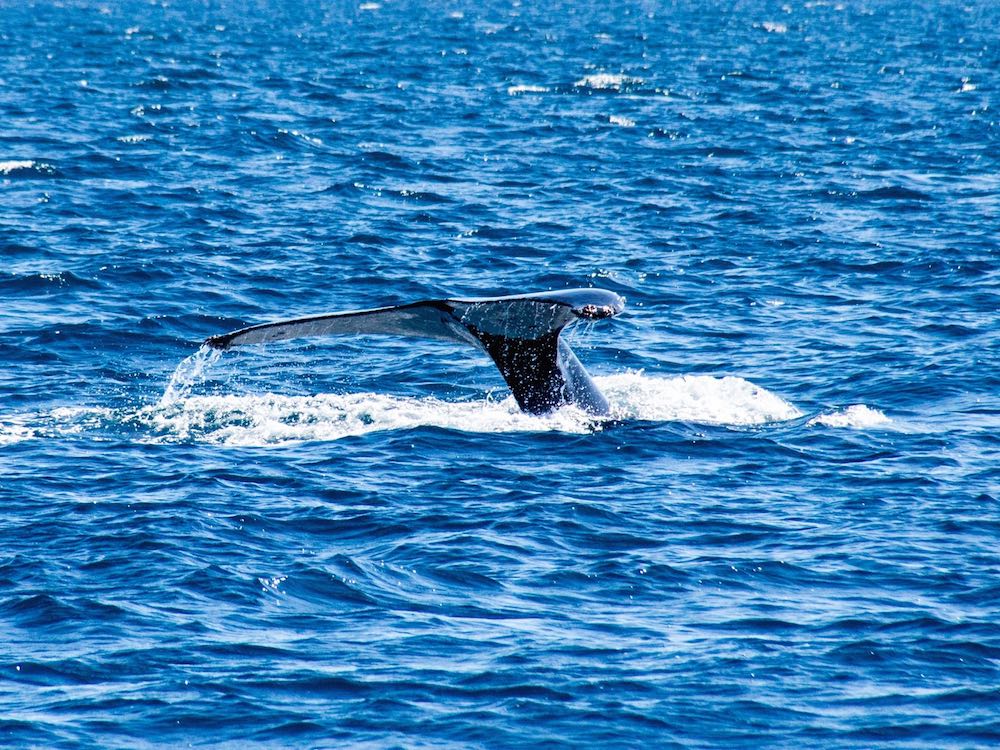 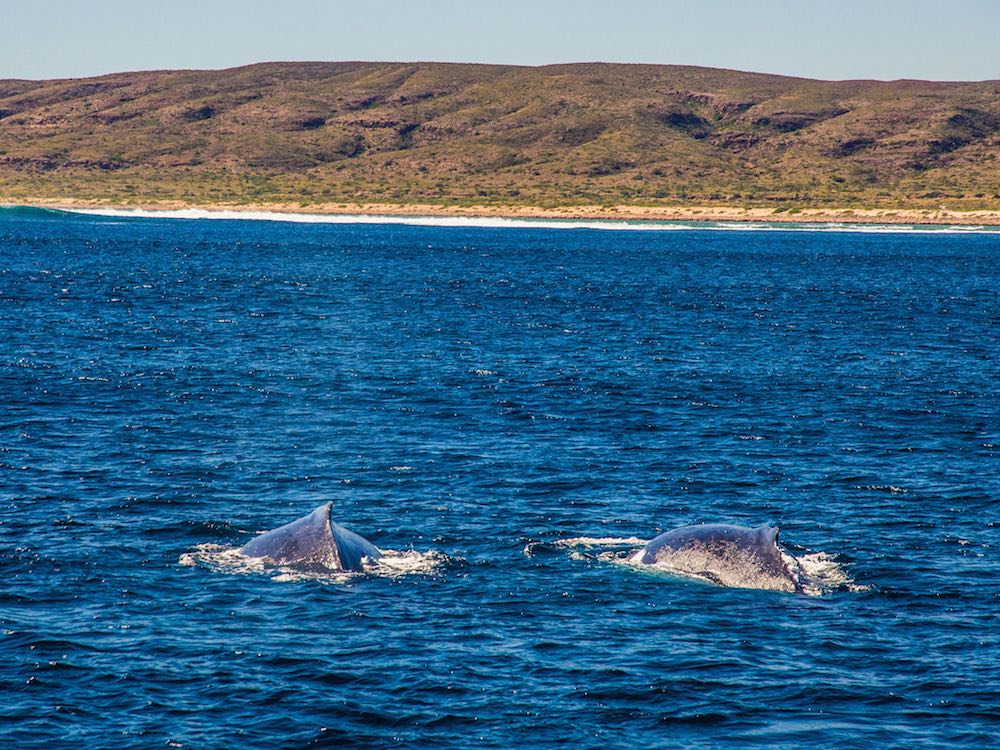 Then they started breaching.

First of all, there was one a hundred metres or so to the side of us, rising almost vertically before collapsing in a heap and a huge splash of water. Apparently, they do this to remove the barnacles which attach themselves over a period of time.

But then, another one breached immediately in front of us as we were sat on the bow. The noise of the crash as it hit the water was incredible. Unfortunately, this happened while I was facing in the opposite direction listening to someone talking about how to cook pasta. Please feel free to email me if you’d like a step-by-step guide on how you can get it really nice and “al-dente”. But don’t expect a cohesive reply as I’m still gutted I managed to miss one of the moments of the trip.

It wasn’t too long though before one of the biggest moments of our lives arrived – albeit in an unexpected fashion.

We stopped for a mid-morning snorkel in the hope of seeing some turtles and maybe a reef shark or two. Although the water was 25 degrees it was still a bit too cool for us to snorkel without a wetsuit. However, Nicky’s was ill-fitting to the point that there were large gaps above her chest which let in air – which, when combined with her natural upper body assets, was like trying to put her face in the water over a huge inflatable raft. So, she returned to the boat with our underwater photographer to remove it. Having done so, the two of them turned to snorkel back out to the rest of us. At that moment our captain was screaming and gesticulating wildly to the two snorkelling guides while pointing to just behind our boat.

Our guide didn’t seem to register what was going on but, sensing that there was either a man-eating shark looking for a snorkeller or two, or there was something else really special in the water with us, I decided to turn around and swim back.

Just then, out of nowhere, the huge bulk of a humpback whale came into view merely a few metres away from me, its calf swimming closely above it.

I just dangled there in the ocean, watching almost in disbelief as it slowly crossed my vision from left to right, until its full 12 metres of poetry in motion disappeared again into the deep blue. With my head still in the water, I could hear the whoops of excitement coming from the boat a few metres away. Later I found out they belonged to Nicky who had just had an even closer encounter than me.

It only lasted for a matter of seconds but it’s a moment that will last with us both forever. Particularly as it was so unexpected. 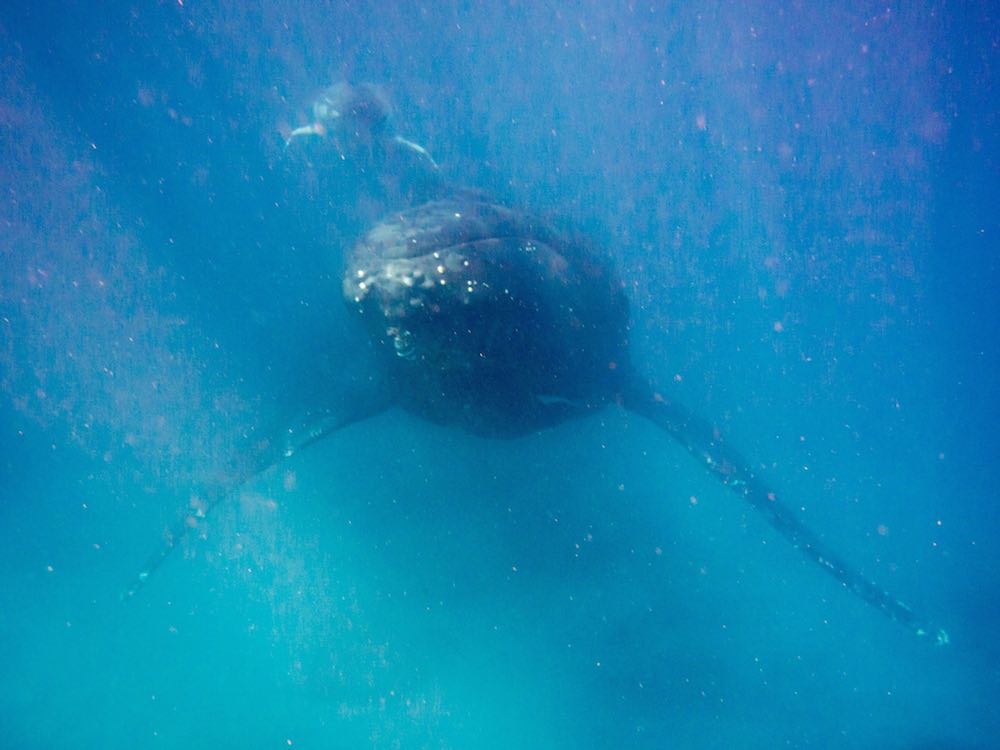 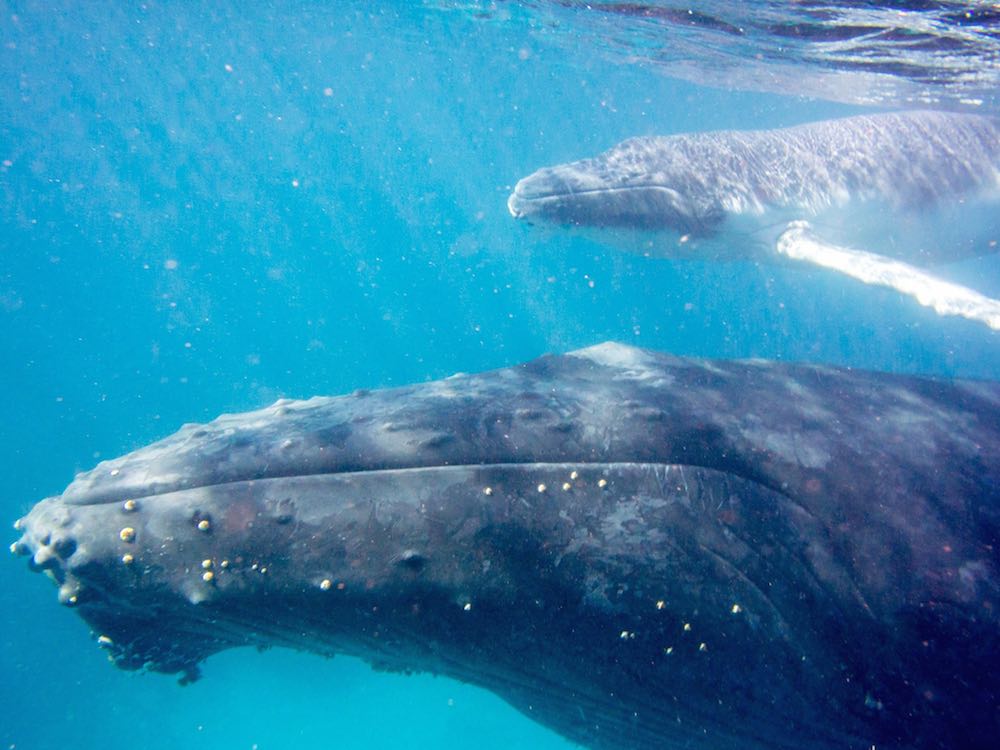 Meanwhile, our search for a whale shark continued. Although they are common in these waters at this time of the year there’s no guarantee they’ll be seen. Bearing in mind that they can swim to depths of 2000 metres, it can be like looking for a needle in a haystack at times. We watched as spotter planes above us patrolled the reef area looking for the tell-tale signs of a whale shark near the surface.

After a while, we came across some hammerhead sharks. Our tour photographer immediately jumped into the water and started to swim at speed towards one of them in the hope of getting a close-up shot. Yes, that’s right – chased a hammerhead shark. So Australian.

On another snorkelling session, I saw white tipped reef sharks scouring the floor bed below and a beautiful leopard shark passed within metres of me.

But our search for a whale shark was proving fruitless. Eventually, with the late afternoon sun approaching and our spotter plane having just 30 minutes of fuel remaining, our captain had to call it a day and return to the jetty. A fly-pass and roll by the spotter plane was a nice touch but it didn’t really help to satisfy the sense of disappointment of everyone on board. Considering we’d actually had such a fantastic day anyway, it seemed strange that the mood on board was somewhat flat. 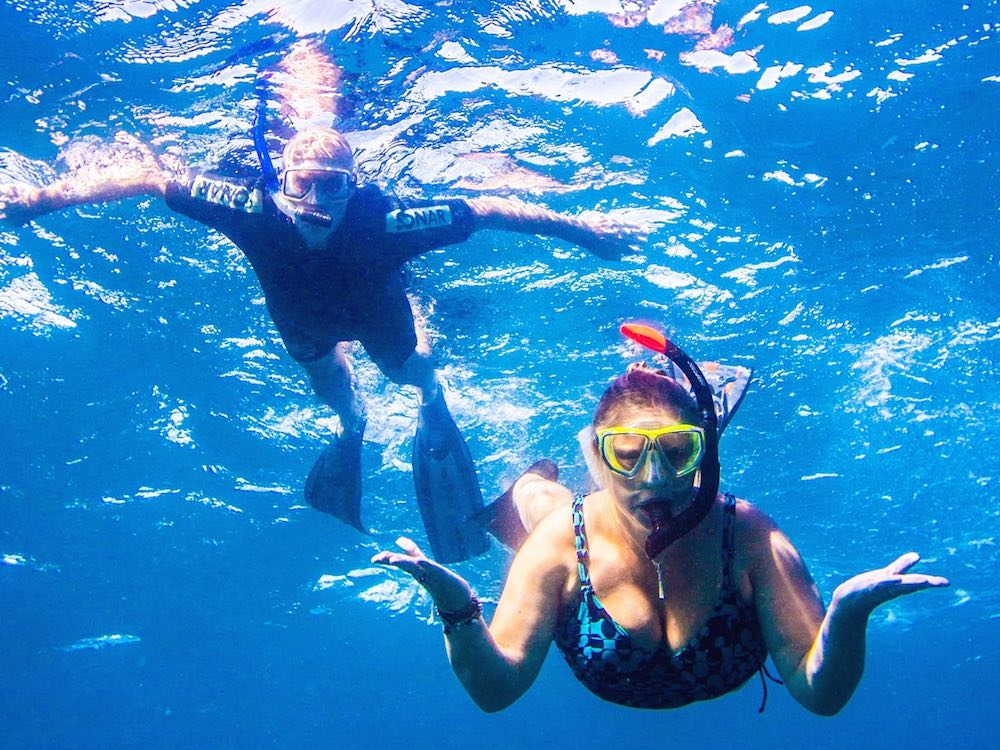 But the good news was that there was a guarantee from our tour company that, if we didn’t get to see a whale shark, we could take another trip with them free of charge within three years. So, on the basis that we had no idea if or when we would be back in this part of the world we managed to get ourselves booked onto another trip four days later.

And, this time, we did get to swim with a six-metre whale shark.

There are plenty of boat tour companies in Exmouth offering trips to see them, and they kind of work together so that if and when whale sharks are spotted, they radio each other and converge in an orchestrated fashion so that strict rules of engagement are applied. For instance, to prevent a free-for-all there are only 10 snorkelers (plus two guides) allowed in the water at any one time. Snorkelers must stay a minimum of three metres away from the shark and are not allowed in front of it all, on the basis that its natural movement must not be interfered with. So in practice, boats wait like aeroplanes queuing for a place on the runway, while groups of snorkelers line up as the whale shark makes its unrestricted way just below the surface.

After a fifteen minute wait, it was our turn. The sense of expectation within me was curiously stressful. Even though we’d already been in the water with an incredible sea animal, this was the moment we’d actually been waiting for. Our group of ten jumped into the water and lined up alongside our guide, like a procession of VIPs waiting for the Queen to come along and talk niceties with us (maybe pass on her own foolproof recipe for al-dente pasta). Our guide then instructed us to put our faces in the water and look out in front. 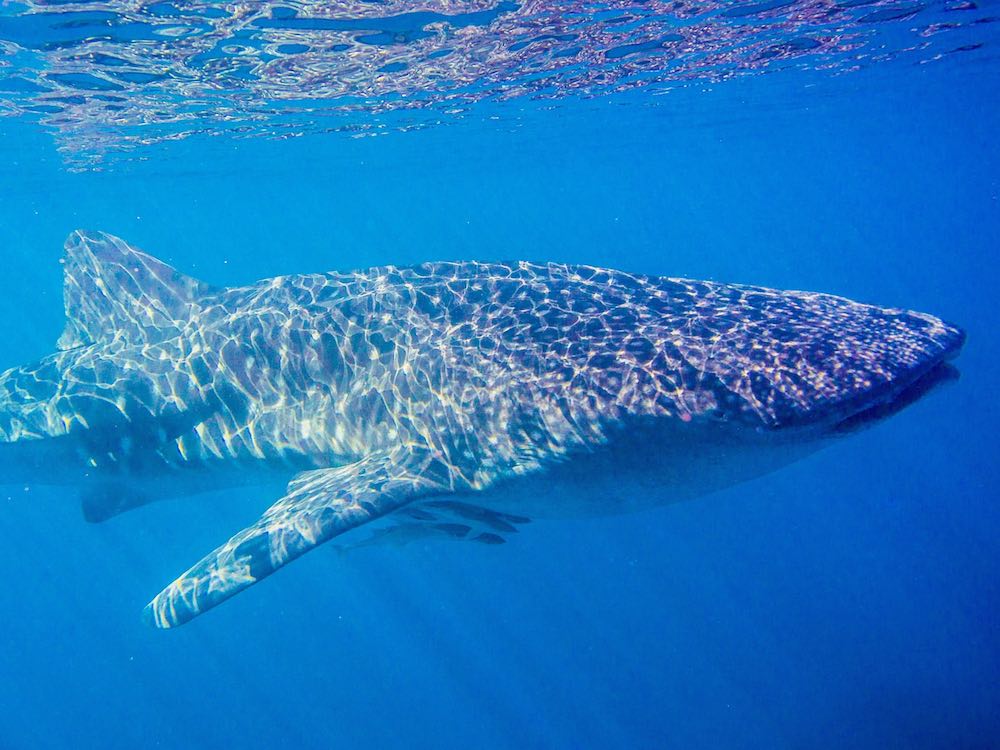 The whale shark that appeared to our right was a beautiful, majestic, wide-mouthed fish of extraordinary size. The water was exceptionally clear so our view of it from barely three metres was just incredible. We were told in our briefing that, as soon as the dorsal fin passes by, we could then swim freely with the shark, keeping a minimum of three metres away. So sure enough, when the moment arrived we pitched to the left and started kicking with our fins, leaning to the side so that we could gaze at the shark as we swam with it.

After a while, I let the shark swim ahead and then turned to swim behind it and take a view from the other side. The view from behind was just as impressive – the unmistakeable sweeping movements of a shark, but in the incredible size of a mature whale shark. 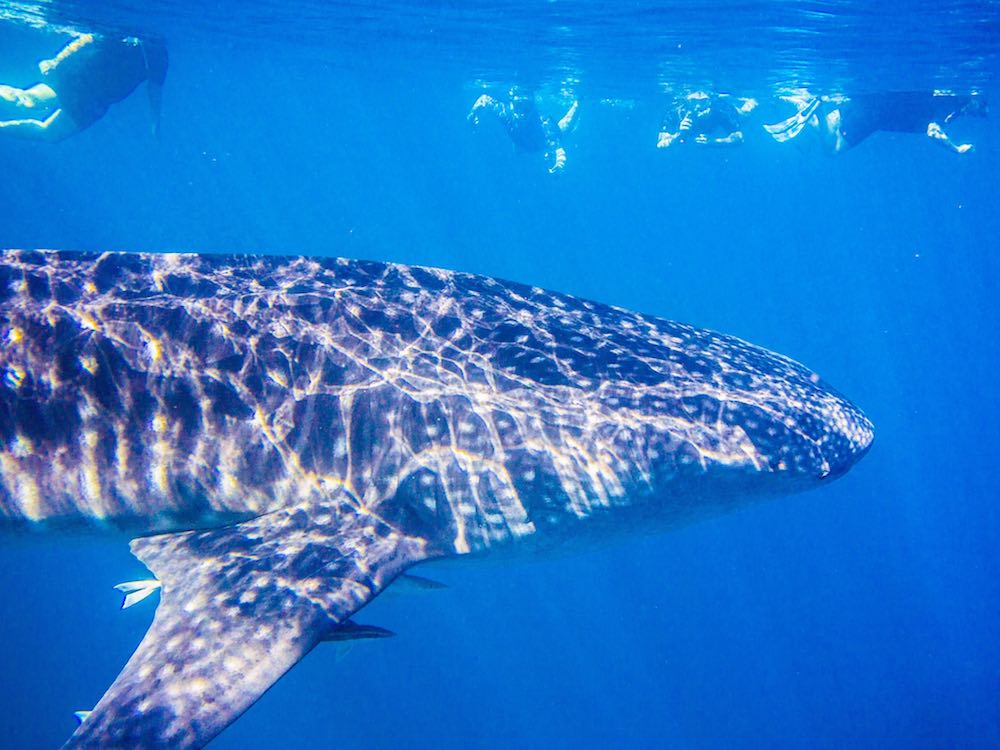 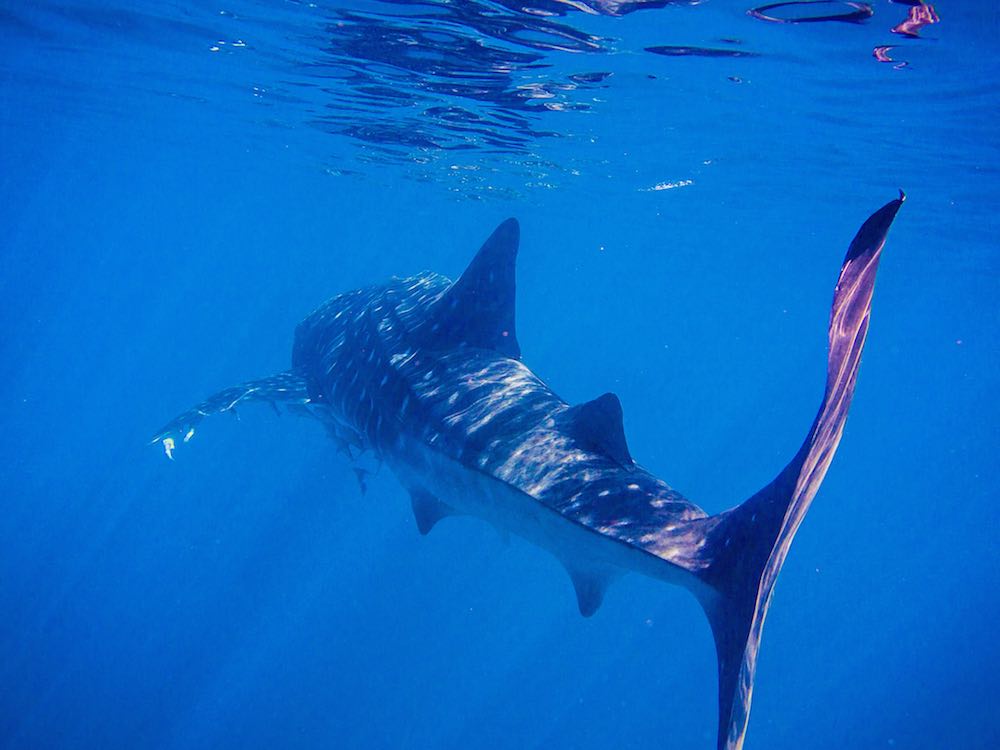 I began to speed up my swim so that I could catch it up again and it was then that I noticed Nicky had already beaten me to it and was swimming alone on its right side. Not only had she bagged the best view of a humpback whale but she’d also trumped everyone again with a solo view of this magnificent fish. Truly amazing!

We returned to the boat elated and feasted triumphantly on salami panini before returning for a second swim – which was just as memorable.

And so, after a day and a half of cruising Ningaloo Reef, we finally managed to swim with a whale shark. A box ticked off on our bucket list for sure, but it was more than just that. Our appreciation of these amazing sea creatures has undoubtedly increased considerably. To be suspended in the ocean with these huge marine animals is a truly humbling feeling and it’s something we’re so glad we were able to experience.

All photographs courtesy of Xander Mcgrouther and Jeremy Taylor.

What did you think? Have you swum with whale sharks? Or maybe it’s on your bucket list? Either way, we’d love to hear from you so please add your comments below. 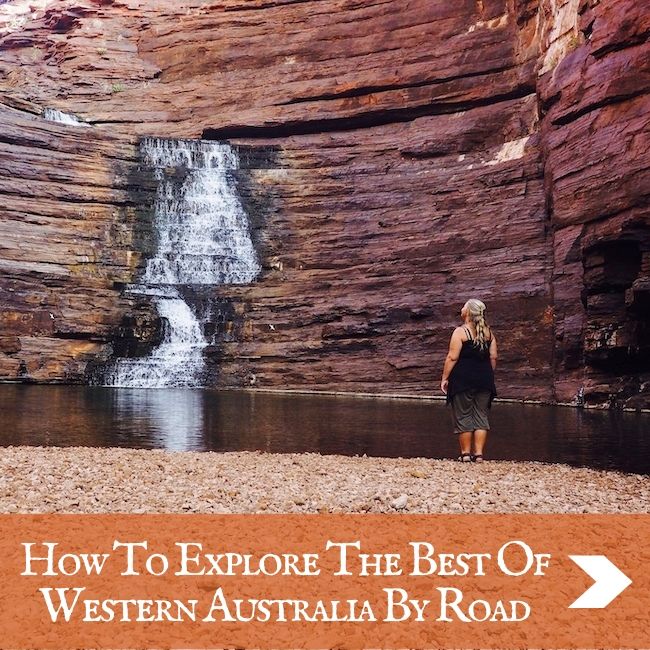 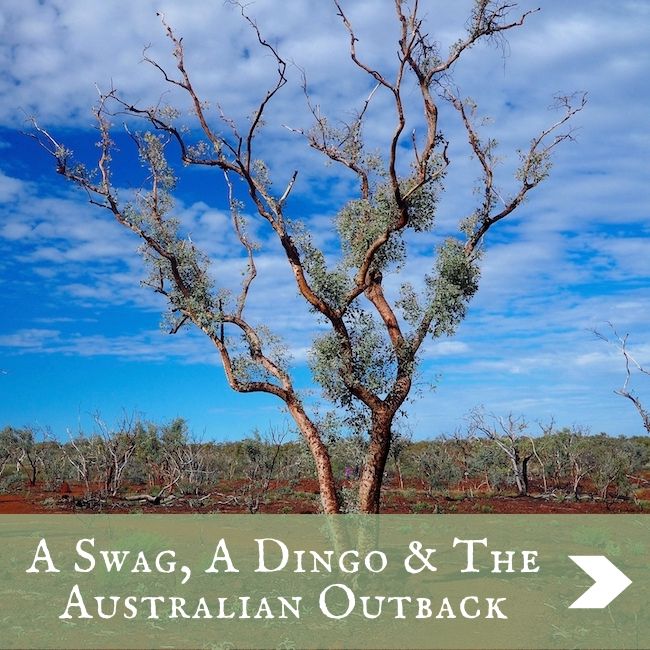 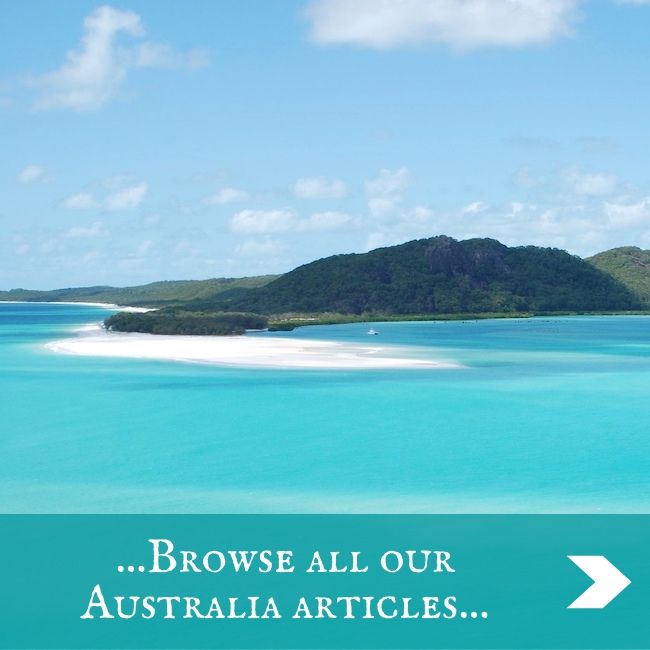 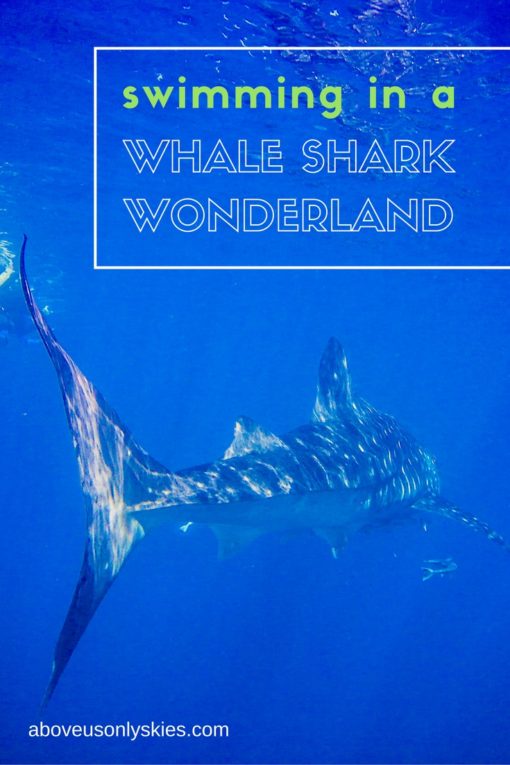 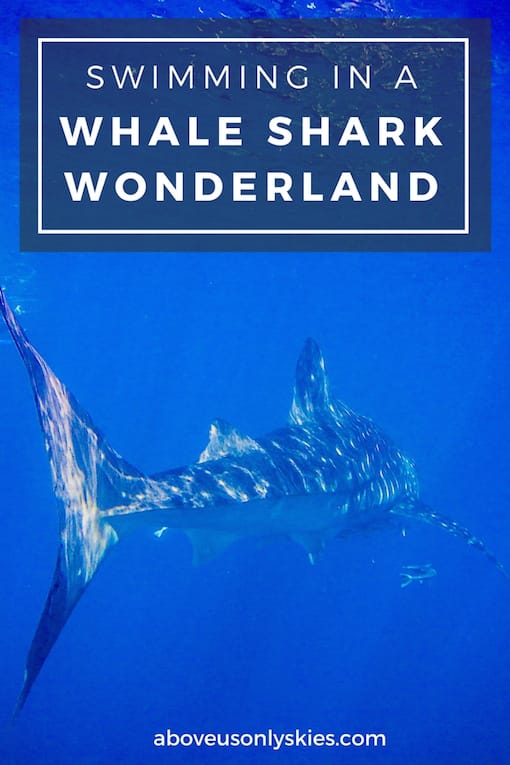