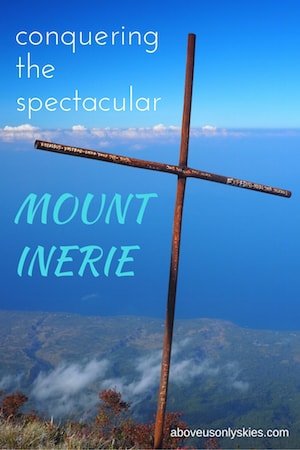 Ever since I set foot in Indonesia I’ve promised myself that I’d climb one of its dozens of volcanoes. I’m not exactly sure why as the task itself was always going to result in my body effectively shutting down for the following 48 hours, but it seemed to be something I simply just had to do.

Gunung Batur and Gunung Agung in Bali were two obvious choices but, for one reason or another, they seemed to just pass me by. And the gruelling three-day trek up Gunung Rinjani on Lombok looked very much like a step too far.

So, when we arrived on the Indonesian island of Flores and stayed for four nights in the foothills of Mount (or “Gunung”) Inerie – at 2,240 metres, the island’s highest volcano – the opportunity was just too good to miss.

Having breakfasted on two banana pancakes and a gallon of coffee I was joined by Neil and Kath (an Irishman and an Aussie who were staying with us at the guest house) for the climb. We set off at 5:30 am so that we could witness the sunrise on our way up and to make sure we were able to get up and down before the afternoon mist and clouds rolled in.

Our guide, Freddie, was an interesting character, to say the least. Until very recently he’d conducted the treks completely barefoot – which, considering the rocky volcanic terrain, seemed to be borderline masochistic. That was until Joe, our guest house owner, bought him a pair of walking boots. And his remedy for treating a fever when it hits him is apparently to run into the jungle and antagonise a nest of bees into stinging him. Not sure if that one’s in the British Medical Journal. 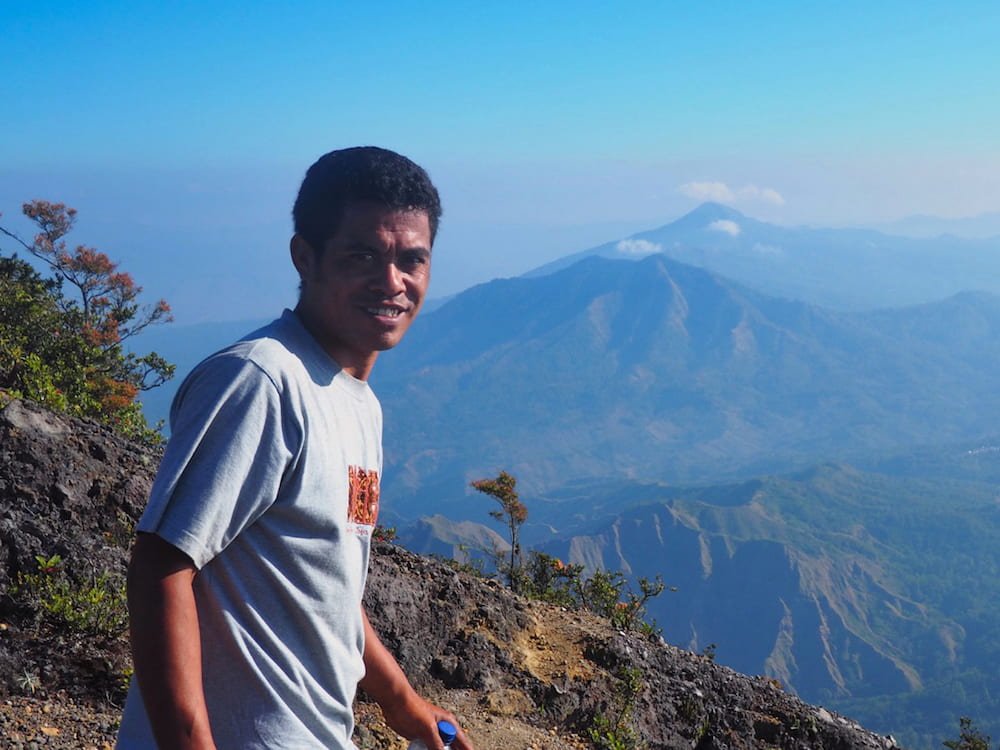 Anyway, our hike started easily enough as we made our way through a small village and up through the grassy terrain into steeper territory. 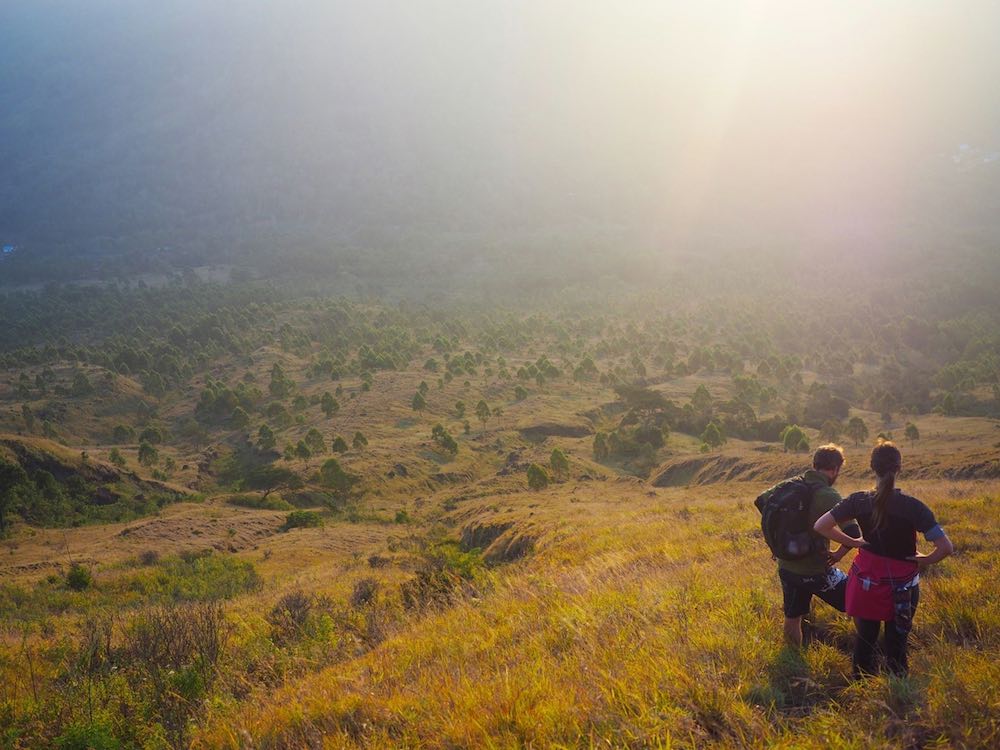 Which is when things started to get a lot tougher. The grassy terrain soon gave way to volcanic rocks and shingle that rolled down the steep incline as we clambered over it.

The sun was now starting to rise behind us, casting a reddish glow over the rim of the volcano. And the unfolding panorama across the valley to the mountains opposite meant that there were plenty of excuses to stop for photographs.

Meanwhile, Freddie was telling us to go “slow, slow” – the only English words he actually knew. The climb was getting more difficult by the minute as we got closer and closer to the summit. The views, on the other hand, were getting increasingly gorgeous.

We eventually reached the crater rim after two and a half hours of exhilarating trekking, before we made the final ascent to the summit via a steep ridge. The drop off on either side was enough to focus our minds on not slipping. But gusts of wind were now blowing in to make the task much harder. 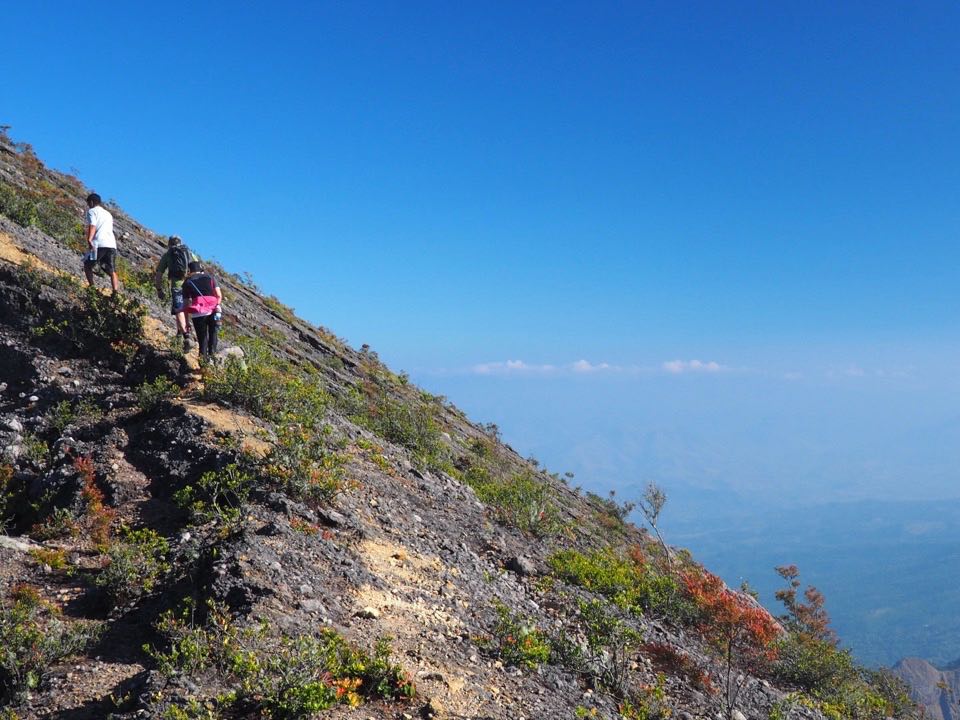 Finally, after just under three hours of the most challenging trekking of our lives, we reached the summit. And what a feeling it was. The views from the top were just incredible and I got a real sense of what it must be like to be a mountaineer who’s scaled a peak for the first time. Ok, it wasn’t real mountaineering, and we certainly didn’t need any ropes to complete the ascent, but it was certainly the most intense body workout I’d ever had. 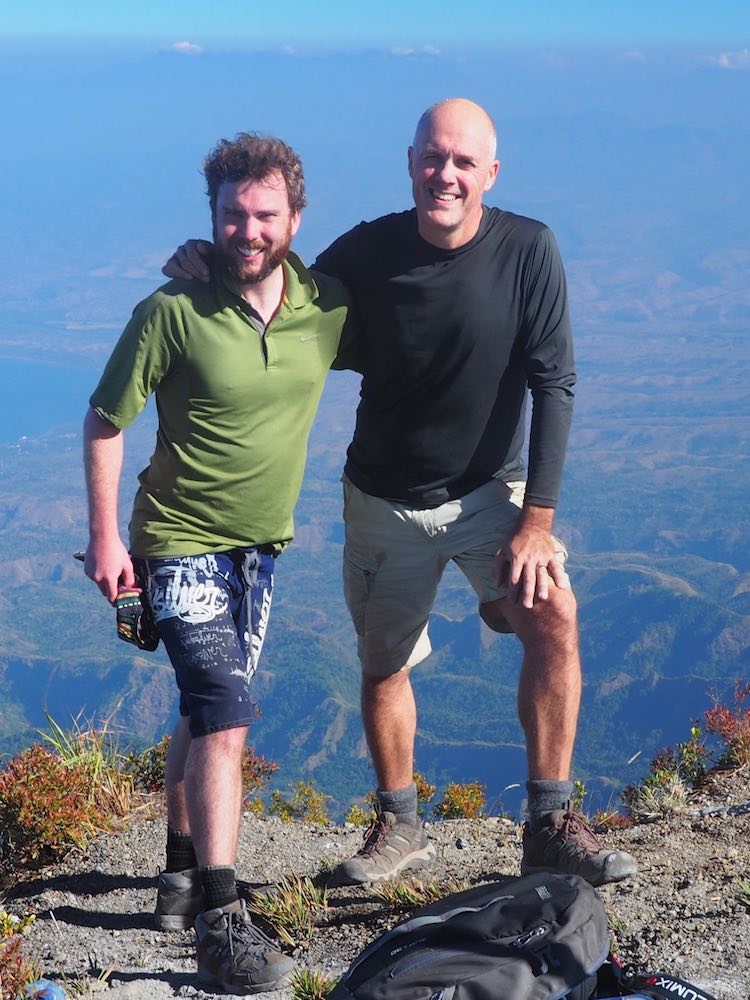 Only the real test was about to begin.

If going up was a challenge, getting back down again was destined to be the challenge that nearly beat us. The first part of the descent – from the peak to the base of the crater rim – involved carefully treading our way along steep shingle, an adrenaline fuelled 30 minutes that was just as enjoyable as the ascent.

Freddie then led us to the next stage, a long, vertigo-inducing strip of sand and shingle which he proposed to tackle by effectively sliding down using our feet as makeshift surfboards. And so, there we were, positively surfing our way down the steep slope of an active volcano at 2,000 metres above sea level – albeit at an extremely pedestrian pace. Freddie’s regular reminders of taking things “slowly, slowly” were by now redundant as “slowly, slowly” was the only way we could actually function.

The effect of the constant strain on our leg and back muscles was beginning to take its toll and the first signs of fatigue were starting to appear. After what seemed like an eternity we traversed off the surfing circuit and across to another long section, this time consisting of loose volcanic rock. Every step we took seemed to be on ground that was constantly shifting beneath us. I could see that Freddie was becoming more concerned about the route we should take down as he stopped to review what was ahead before retracing his steps and plotting a secondary course.

It was then that the problems really started. Firstly, Kath lost her footing as she climbed across a shallow ravine and fell backwards into it, her fall only being broken by the presence of a tree. Shaken, with a slight blow to the head and scrapes to her hands and lower back, she managed to recover her composure and carry on, with the aid of Freddie who guided her down by hand for the next two hours. 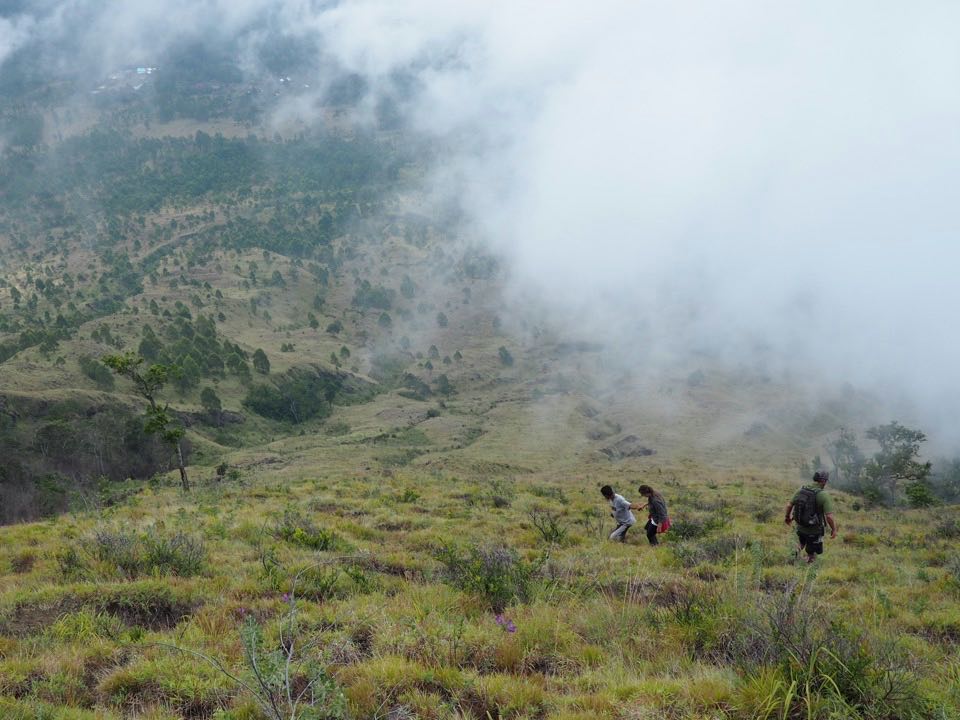 Not wishing to be outdone, I then managed to lose my footing and fall into the shallow ravine on the opposite side. No major injuries but some self-chastising as I couldn’t work out how on earth I’d fallen. I was taking things very slowly, concentrating on each step because of the treacherous nature of the terrain. But the fatigue that was now enveloping me meant that my legs didn’t seem to be doing what my brain was telling them to do.

And that was confirmed not long after when my legs give way again and I tumbled down, only to be stopped in my tracks by the sturdy frame of a bush. This time, it really did hurt but a gash to my right shin was thankfully all that I suffered.

From here on in it was just a case of getting down the damned volcano and back to the sanctuary of our guest house – where Nicky was waiting with a camera to record the moment for posterity. 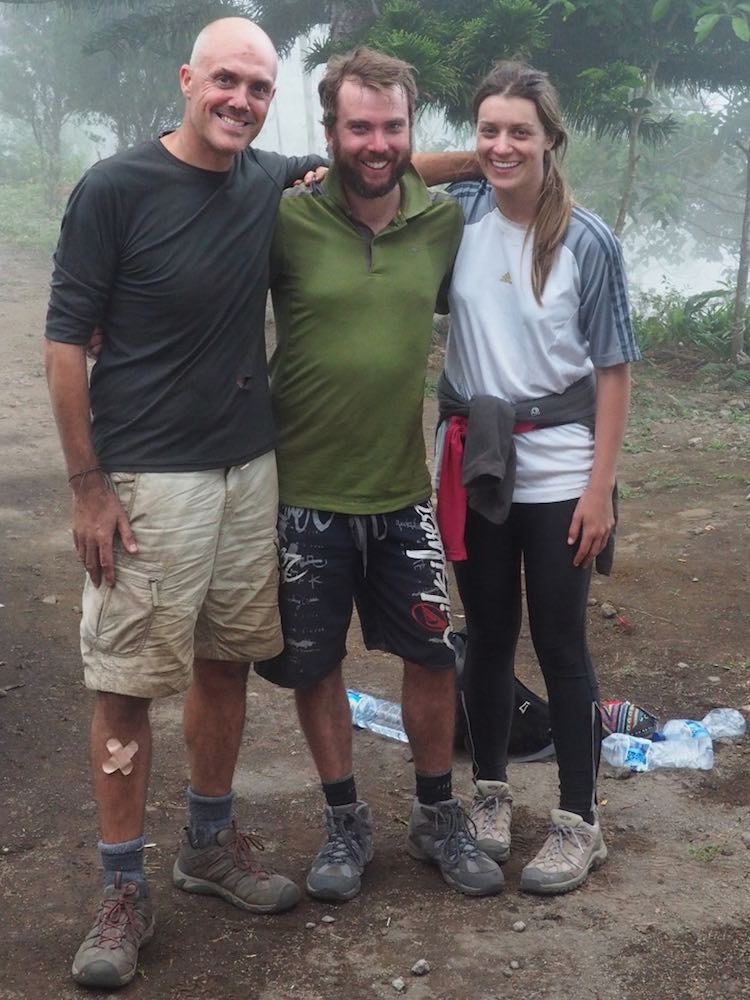 I can honestly say this was the first time I’ve ever suffered fatigue to such an extent. But, after seven and half hours of bone-jarring and muscle-sapping exercise, it was really no surprise.

Got to say though it was absolutely worth it. Inerie (pronounced “Inner Ear”) is a beautiful conical volcano, situated amid fantastic Flores scenery, and to scale it as we did was both a privilege and a proud moment. Despite the torture of that final couple of hours, for three-quarters of the hike, it had been one of the most challenging yet rewarding things I’ve ever done. And, although there was a palpable sense of elation when I reached the summit, the thing I’ll remember most was the journey up the mountain to reach it.

Which, of course, was in the company of my fellow volcano conquerors, Neil and Kath and our indestructible guide, Freddie. 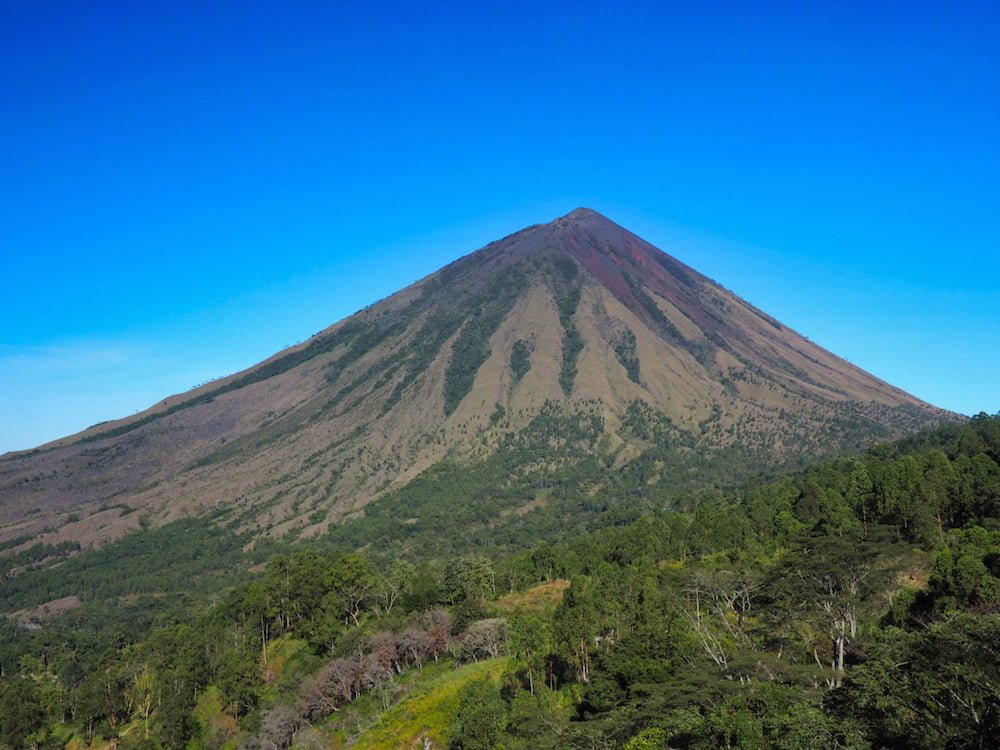 What did you think? Have you climbed Mount Inerie? Or maybe you’re thinking of scaling it as part of your Flores adventure? Either way, we’d love to hear from you so please add your comments below.
MORE ON INDONESIA 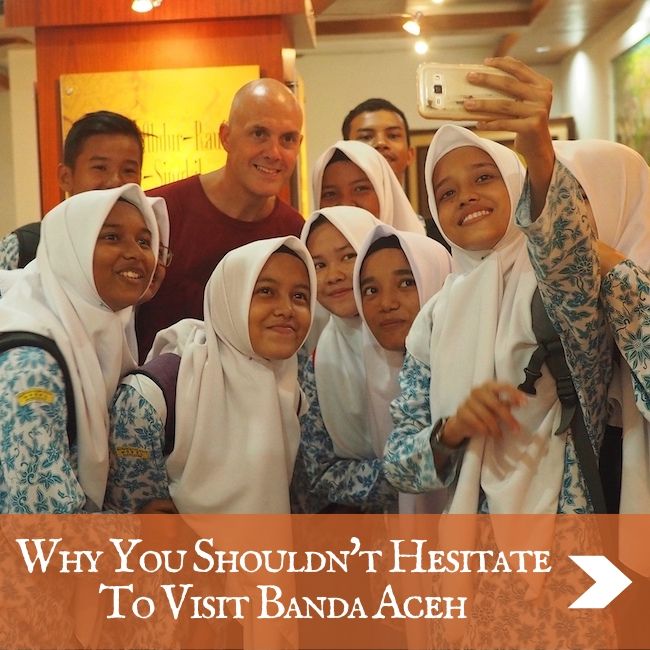 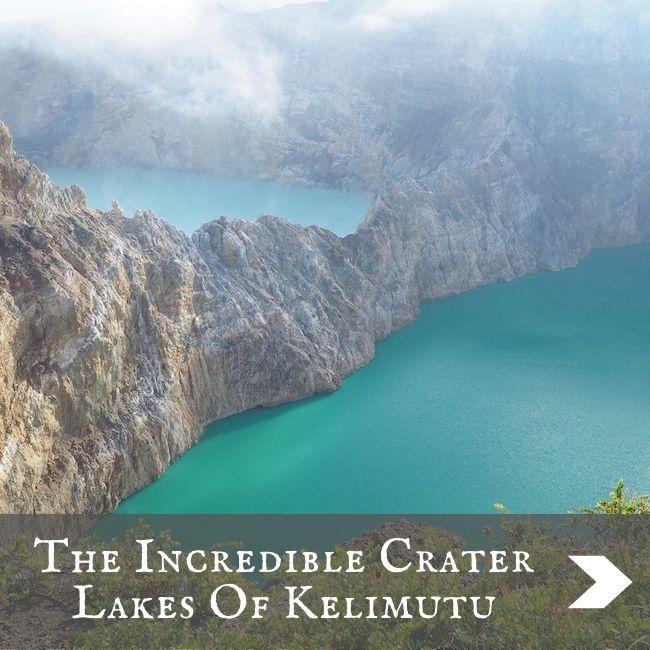 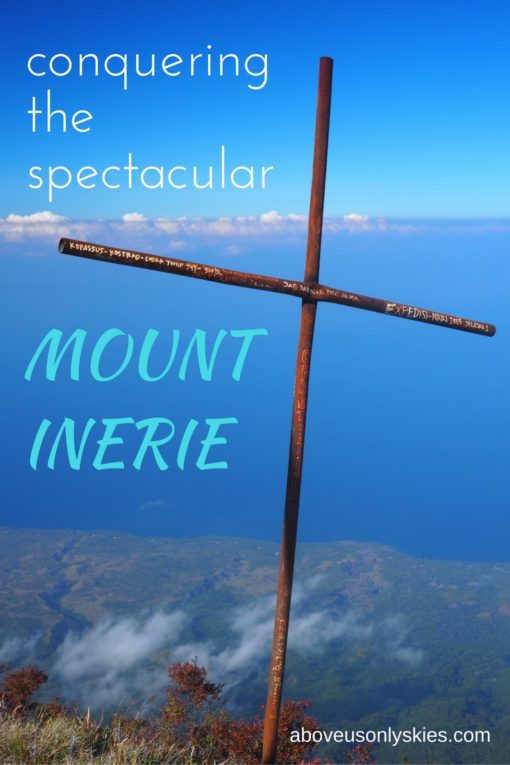 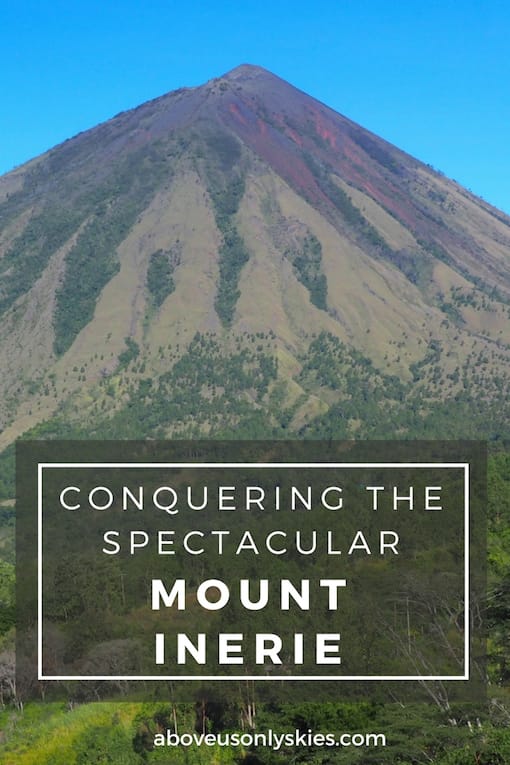