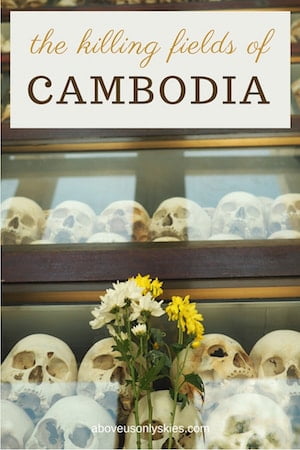 “I’ve come here to enjoy the country for two weeks, not to get depressed.”

Ok, I’ve paraphrased slightly but this “quote” represents some of the comments I’d read on various forums from posters who’d expressed reluctance about visiting sites such as the Killing Cave of Phnom Sampeau, the Tuol Sleng Museum of Genocide in Phnom Penh and the Killing Fields of Choeung Ek.

Fair enough, I guess. There are plenty of things to see and enjoy in Cambodia without going anywhere near such places. But to us, visiting Cambodia without trying to gain an understanding of the country’s horrific recent history is akin to travelling to Krakow in Poland without witnessing what happened at nearby Auschwitz Concentration Camp. Or, dare I say, visiting New York City without spending some time at Ground Zero.

And, to be fair, the sites in Cambodia are particularly harrowing – made even more so by the sheer brutality on display. Lest we forget, between 1975 and 1979 the Cambodian people were subjected to some of the worst atrocities of the 20th Century by their own rulers – the Khmer Rouge and their deranged leader, Pol Pot. During that time approximately 2 million people (nearly 25% of the entire population) died, either by execution or indirectly through starvation or disease.

Pol Pot’s big idea was to create a totally agrarian society that lived solely off the land – and anybody who potentially stood in his way, such as “intellectuals” – who were identified as such by just wearing glasses or knowing a foreign language – were murdered, along with their entire families.

“To destroy you is no loss, to preserve you is no gain...”

My first encounter was while we stayed in Battambang and I took a motorbike taxi trip to the Killing Caves of Phnom Sampeau. At the cave opening, a simple hole in the ground surrounded by foliage, my guide described how Khmer Rouge soldiers would bludgeon their victims to death before throwing them over the edge to the cavern floor, some 30 metres below. What made the location so chilling was the utter ordinariness of it. No signposting. No marked footpath. Just a slightly weathered track through the foliage.

Inside the cave, a reclining Buddha looked out over a glass memorial and the remains of a number of victims. Nothing sanitised about this display. Just a crude and raw pile of skulls and bones that looked as if it hadn’t been moved from its original resting position. An upsetting moment to say the least. But there was worse to come when we moved on to Phnom Penh. Much worse.

When the Khmer Rouge marched into Phnom Penh in 1975 to “liberate” Cambodia after years of civil war, they immediately started their plans for transforming the country, declaring that it would start again at “year zero”. As a result, the capital city was emptied and the vast majority of its people forced to work on farms in the countryside. Those that didn’t were tortured and imprisoned at special centres, such as the one at a former school known as Tuol Sleng where 17,000 men, women, and children were detained, of which only seven are believed to have survived. And it’s now open as a museum.

As a museum, it’s stark, bare and utterly chilling. For instance, on the ground floor of the first block are a row of classrooms, each converted into interrogation rooms and consisting of nothing more than a metal bed frame with shackles and a photograph on the wall behind of a bloated, decomposing body chained to the bed.

In another block, rows of brick and wooden holding cells, barely large enough to detain one standing person never mind the actual number of four, were left with their doors open inviting visitors to step inside and get a taste of how it must have felt to spend endless hours in there, not knowing your fate, but no doubt fearing the worst. So raw was this that there were even what looked like spots of dried blood on the floors and walls of some of the cells. 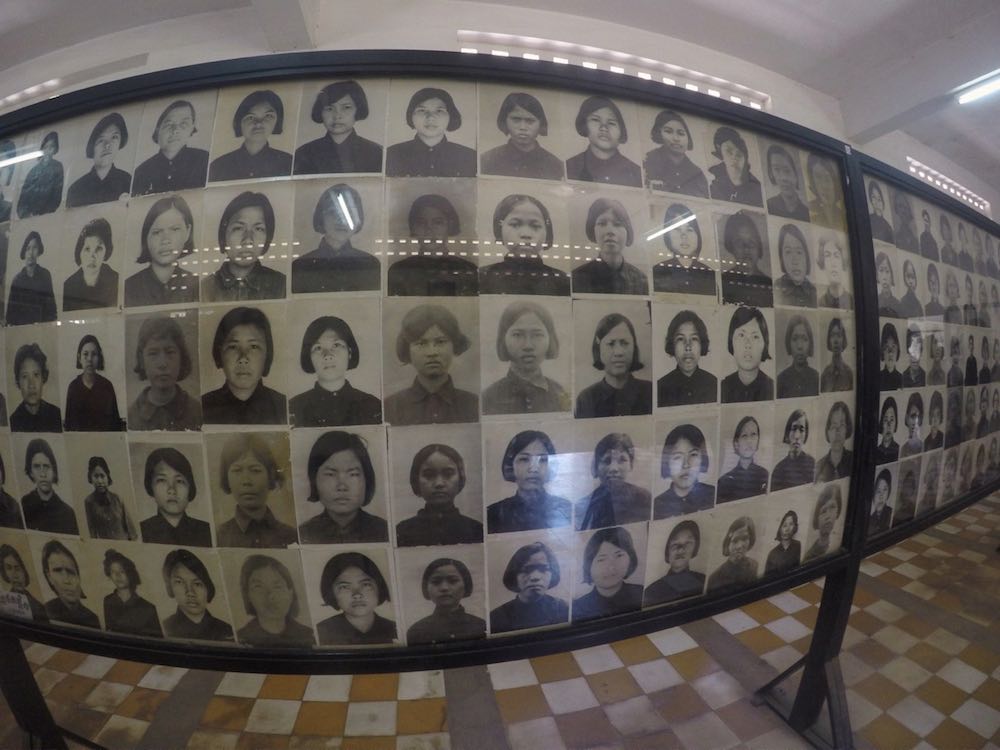 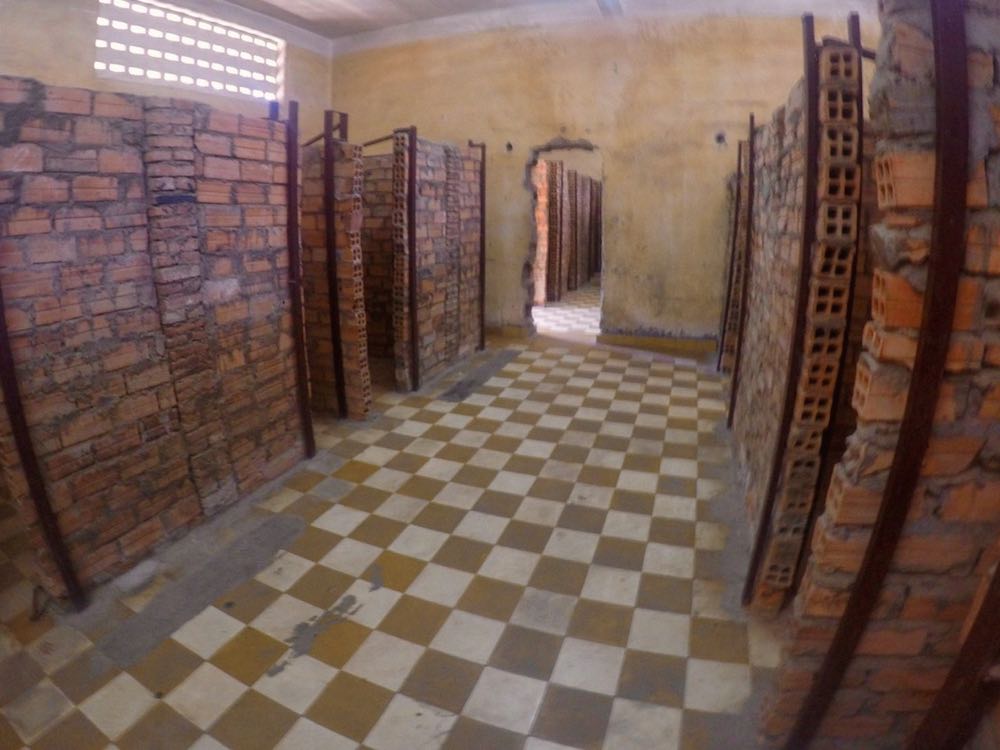 Essentially, centres such as Tuol Sleng also served as holding places for prisoners who were then taken into the countryside to be murdered in what became known as the “killing fields”. About 20km outside of Phnom Penh lies Choeung Ek, site of one such field and which now serves as a memorial to all the others scattered around Cambodia.

At the site we were provided with a superb audio guide and, for the next two hours, we walked around the site in silence as we listened to descriptions of the atrocities committed, looked at the mass graves and heard the stories of some of those who actually lived through it.

Once again it was a very raw and un-sanitised experience. Our audio guide explained that human bones were still being uncovered from mass graves as monsoon storms shifted the ground they’d been buried in. And signs had been erected asking us to avoid standing on them. 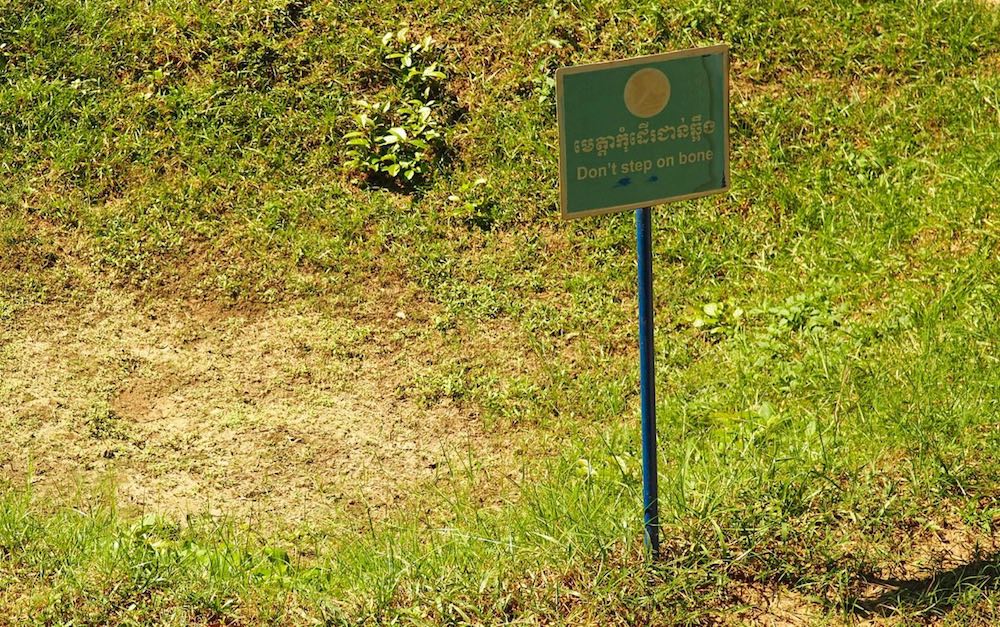 We learned that groups of prisoners would be forced to kneel down beside ditches before soldiers would murder them by clubbing them to death using such things as iron ox-cart handles, wooden clubs, and hoes to save on expensive bullets.

But, by far the most upsetting moment was when we were confronted with a mass grave containing the corpses of over 100 women, children, and babies. Next to the grave was a large tree on which Khmer Rouge soldiers killed babies by holding their feet and bashing their heads against the trunk, before tossing them into the grave.

Listening to those descriptive words on the audio guide while looking at the tree, with its adornment of countless friendship bracelets, is a moment neither of us will ever forget. And it’s why everyone who travels to Phnom Penh should visit Choeung Ek. 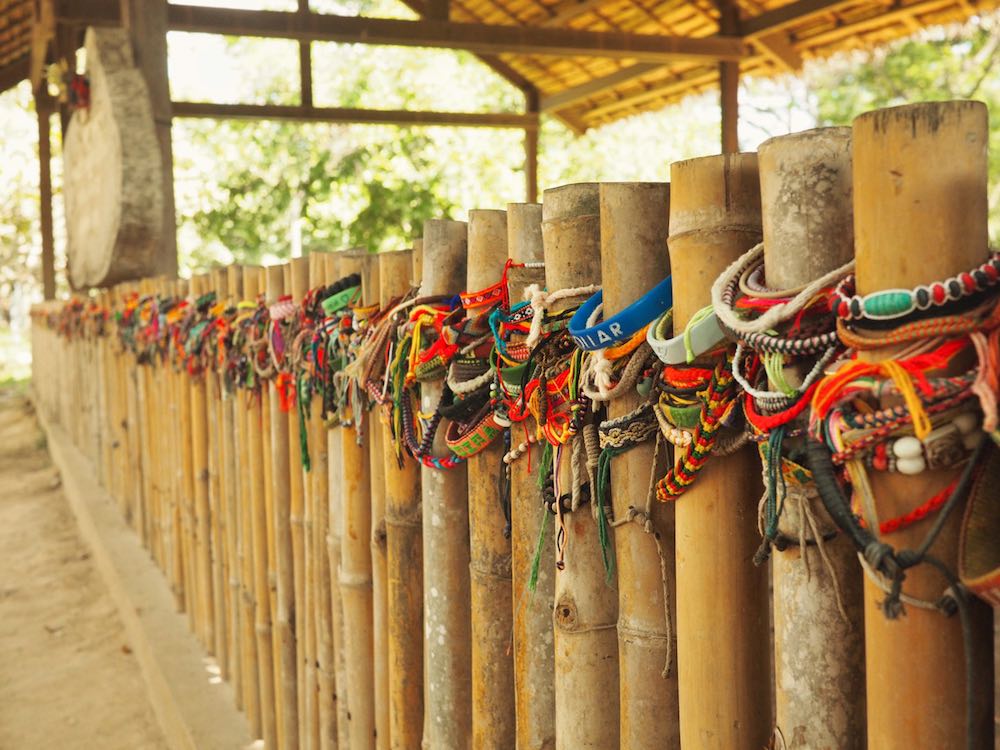 At the end of the tour, we were able to visit the memorial pagoda, which houses hundreds of skulls behind multi-storey glass cases. Grisly as it might seem, it was actually very tastefully done and it felt right. Like other genocides of the past century, it’s a passage of history that cannot be forgotten and the memorial serves as an extremely poignant and visual reminder of the kind of suffering caused by the deranged minds of despots. 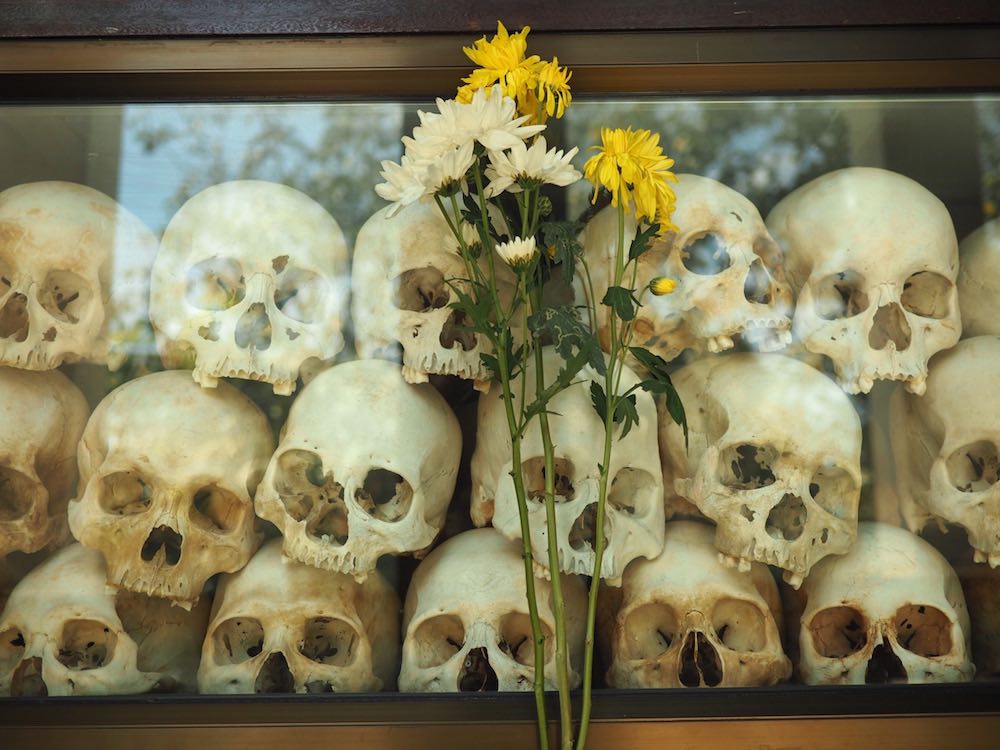 Human skulls at the Memorial Pagoda

Yet, as we left the site and returned to our taxi, we were dumbfounded by a question from our driver.

And he was serious. He was offering to take us straight from Choeung Ek to a shooting range where we could apparently let off some steam by firing AK-47s, amongst other things. Not that it was something we’d want to do anyway, but the apparent insensitivity and lack of appropriateness just stunned us.

Cafes and stalls at the entrance/exit to the museum were also quick to entice us in for a beer, one woman opening up her fridge door like a game show assistant showing off that evening’s prizes. We understand that people are only just trying to make a living in what is still a very poor country but it left us scratching our heads somewhat.

The experience itself might not be for everyone. It’s certainly harrowing, upsetting and (quite frankly) depressing. Calling it a “tourist attraction” doesn’t seem right either (although in Phnom Penh every taxi and tuk-tuk driver will offer to take you there as part of a wider tour). But you won’t regret it if you decide to go.

Reading about what happened 40 years ago is one thing – actually seeing and feeling it is another altogether. 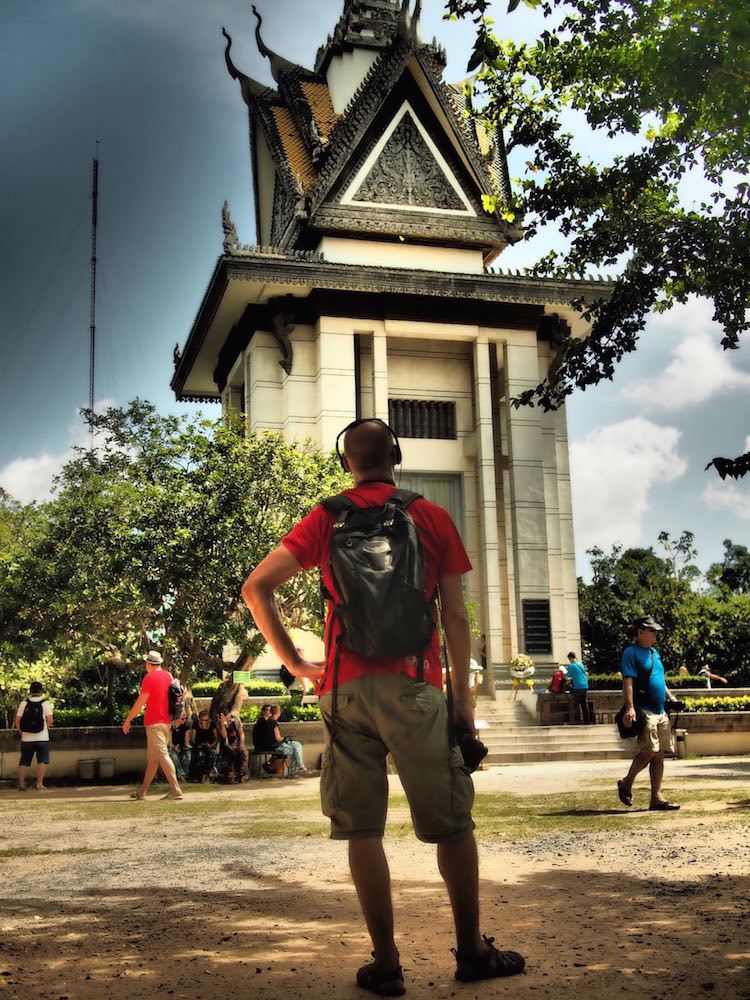 Ian at the Memorial Pagoda

What did you think? Have you visited the Killing Fields of Cambodia? What sort of impression did it leave on you? Or maybe you’re planning on visiting soon? Either way, we’d love to hear from you so please add your comments below. 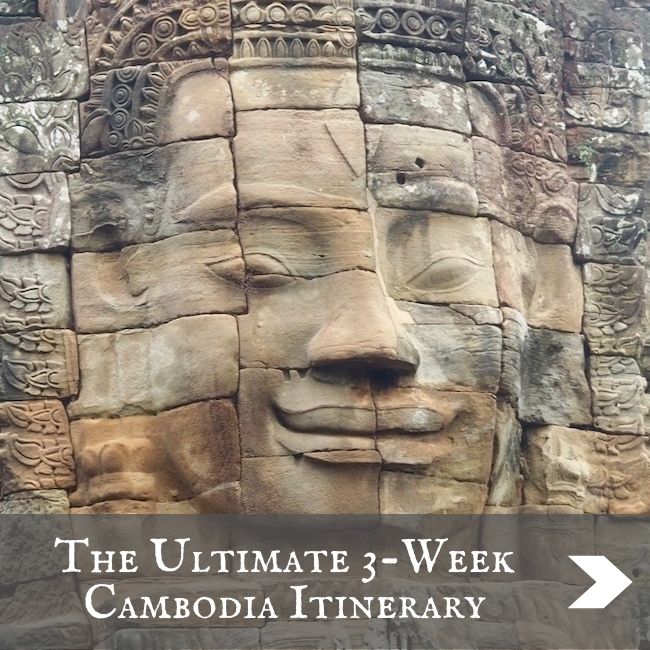 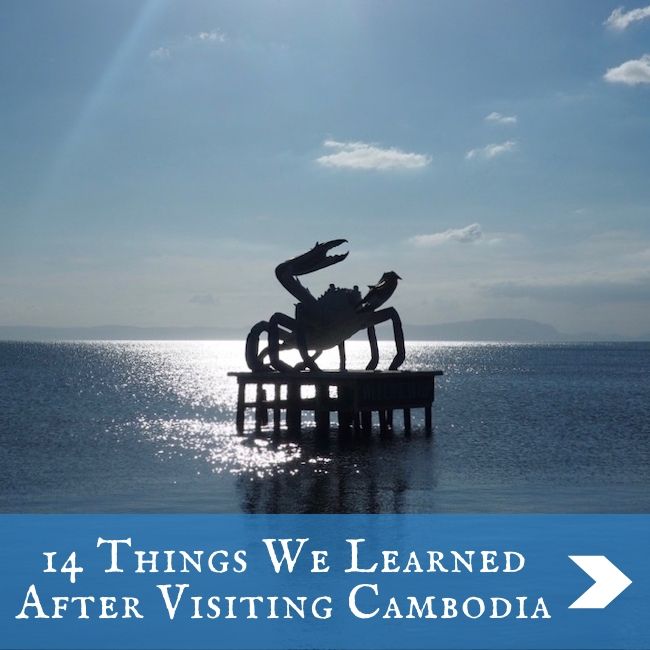 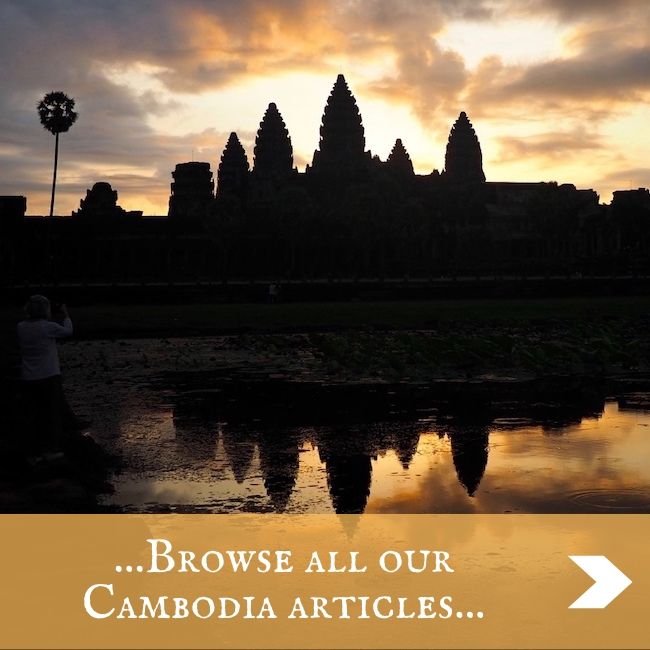 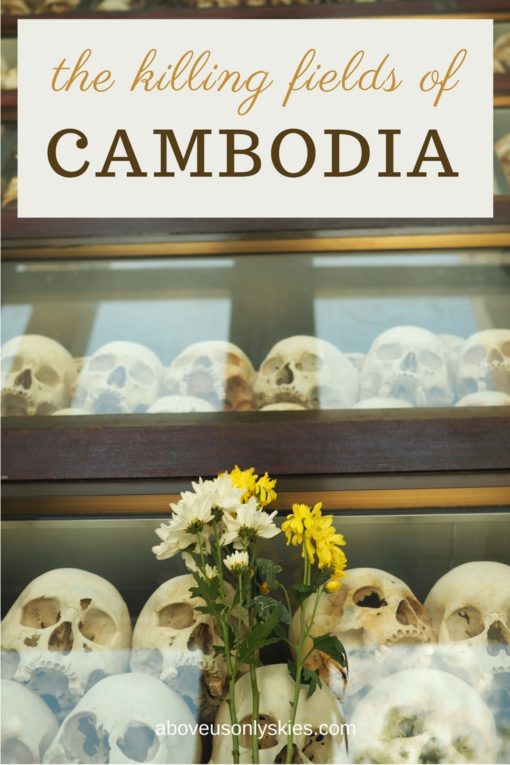 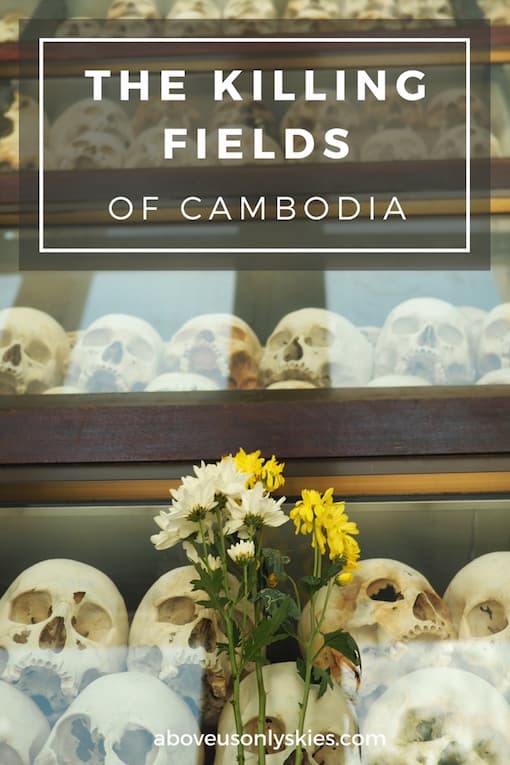