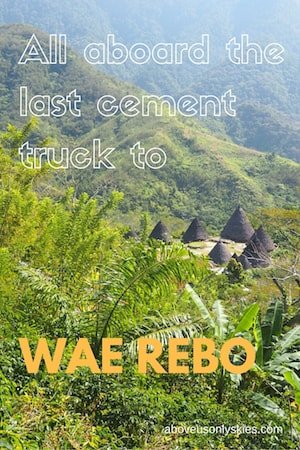 The uber-remote Manggarai village of Wae Rebo, located high up in the Flores mountainside, was one of the first places we’d highlighted to visit when we were planning our trip to Flores. Our research told us that the four-hour jungle trek to Wae Rebo was going to be the most challenging part of actually getting there. But, as we’ve come to expect of Flores, that turned out to be only half the tale…

The story began as we arrived in the town of Ruteng, where we’d booked into the Susteran St Maria Berdukcita, a convent which also doubles as a guest house. And, as you might expect, a spotlessly clean one to boot.

Part of the appeal of staying there was to be woken at 7 am to the sound of a choir of Catholic nuns belting out some hymns (different, I grant you but let’s just call it a life experience). Alas, it wasn’t the calming sound of a convent choir we awoke to but the rather more annoying howls, yowls, and barks from a group of dogs/puppies coming from some of the nearby houses. Unfortunately, it was the first of three consecutive nights with hardly any sleep.

However, our visit to Ruteng included a meal at a place called “Resto Cha-Cha”, which produced a turn of events which were unexpected and left us lost for words.

Although we knew we wanted to go to Wae Rebo from Ruteng we didn’t know as yet how we were going to get there. We’d been quoted £150 from a “tour operator” at the convent for a car and driver for two days, a local guide and overnight stay in Wae Rebo, which was way above what we were prepared to pay.

After chatting with Jofan, the owner of Cha-Cha, he came up with a solution that we initially found hard to believe. For 40,000 IR (£2) each we could have a lift the following day on the back of a truck/bus owned by one of his relatives to Dintor, near Denge (a village that sits at the foot of the hiking trail up to Wae Rebo). And we could stay as guests at his family’s home after we’d checked out of the convent and until the truck was ready to leave. So we did.

We were greeted by Jofan’s wife, Yayuk, with a “Please sit down, our home is your home. And what would you like for breakfast?”. We’d already eaten before leaving the convent but when presented with coffee, tea and huge slices of chocolate cake there really was only one thing to do.

Next up, lunch with the family and then we were invited to spend a couple of hours relaxing in a guest bedroom until our transport arrived, and where we could leave our backpacks until we returned from Wae Rebo. And, just in case we needed some additional sustenance on our trek, we were handed a picnic box full of pork buns (like Chinese dumplings, but made with sweet bread)!

Indeed, our time with Jofan, Yayuk, and their lovely family was both a very humbling and uplifting experience. 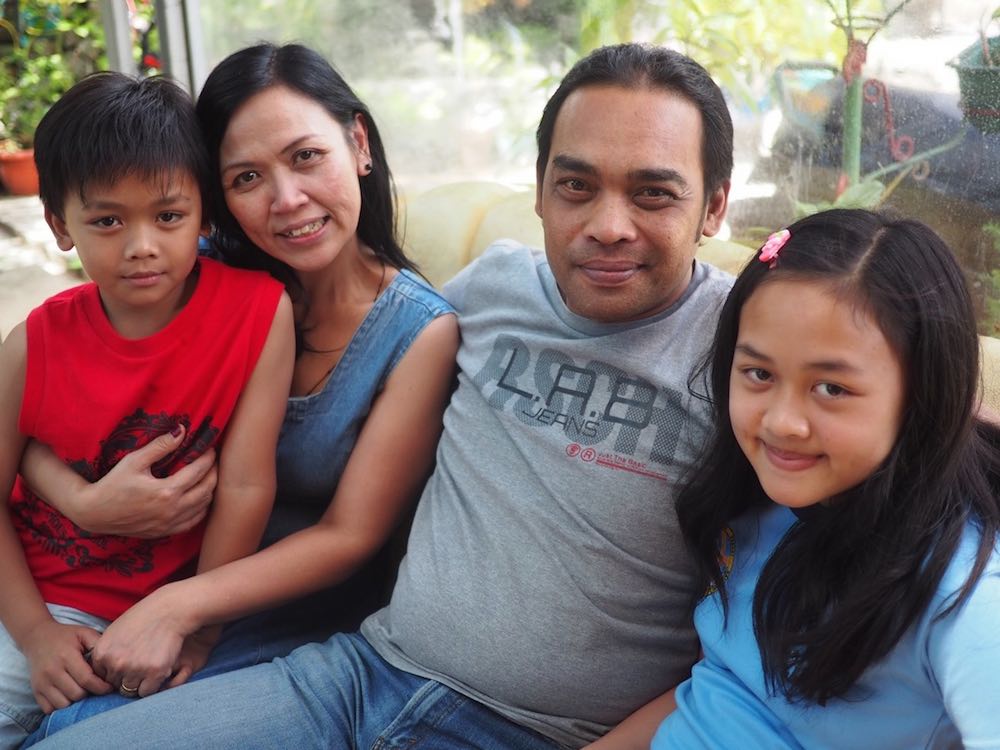 And then at 4:30 pm we were ready for our three-hour journey up to Dintor, up through the jungle in the back of a truck fully laden with bags of cement on twisting and precipitous bitumen-free roads. At certain points, I looked over to my right to see that the road had completely collapsed over the side of the mountain as our driver slowly manoeuvred his way over the huge potholes. 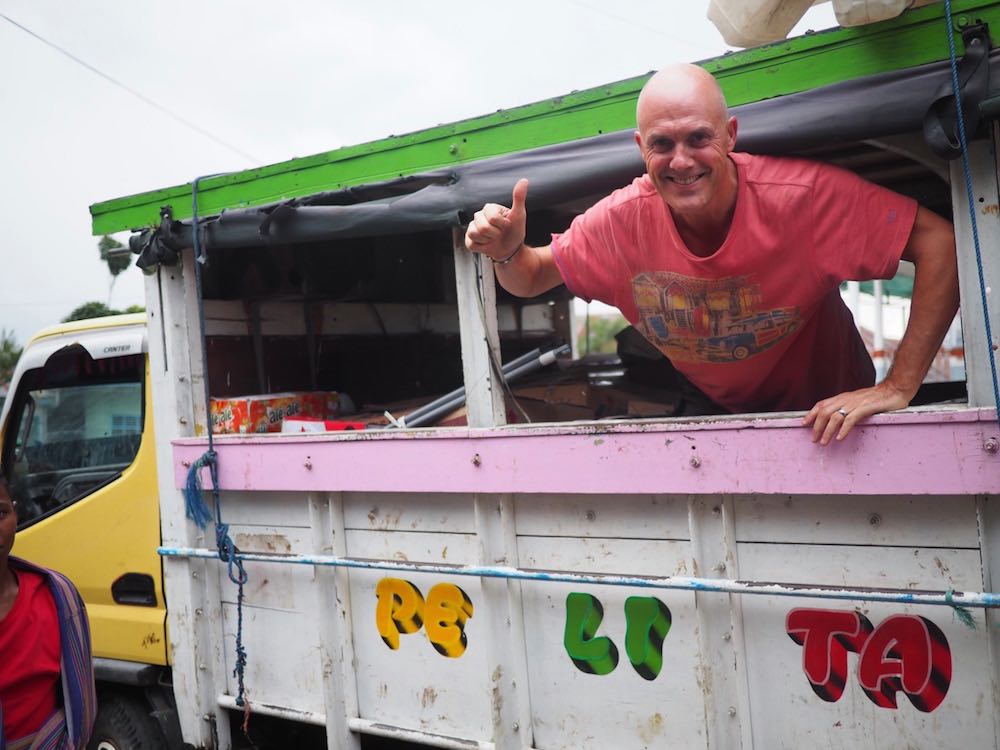 And, as the sun descended behind the mountain tops and we passed through villages, we were again treated to children of all ages waving at us from their humble homes, with grins stretching from ear to ear. Make no mistake, living conditions here were very basic. Many of the houses were just wooden shacks with no flooring and just a thin mattress on the floor for sleeping on. It’s an image of Flores that will remain with us, particularly when we compare it to the general standard of living in Bal. But the abiding images will always be the genuine warmth and friendliness of its people, and especially its children.

And so, after one of the most insane journeys we’ve ever experienced (but oh so enjoyable) we arrived in Denge. Only, we didn’t quite arrive in Denge as the truck was carrying so much cement that it couldn’t make it up the steep hill. So we ended up staying at Martin Homestay a few kilometres away, overlooking rice paddy fields. Cue our second night with very little sleep.

To say the room was basic – with bare timber walls and floor, with two small single beds – is not overstating things. But we probably would have got to sleep had it not been for the chorus of hundreds of frogs. Yes, we loved the idea of being back amongst nature. But a few hours of sleep would have helped us love it that little bit more!

The trek to Wae Rebo

The following morning, after a twenty-minute truck ride from our homestay up to Denge, we set out on our 9km hike up to Wae Rebo in the company of our non-English speaking guide. The route itself was effectively in two parts – the first being a roughly paved track of white rocks and boulders that would have benefitted from a few of those bags of cement we’d got quite attached to the night before. It was like someone had gone about a world record attempt at creating the longest and steepest crazy paving footpath – but had trashed the idea half way through.

After about 4km the trail changed to a dirt track through the jungle. It was certainly tough going but any thoughts of complaining were soon discarded after the sight of elderly men overtaking us with what looked like huge bags of rice on their shoulders.

Although my composure was tested when a large snake slithered across my feet out of nowhere and across the pathway into the undergrowth to my left. 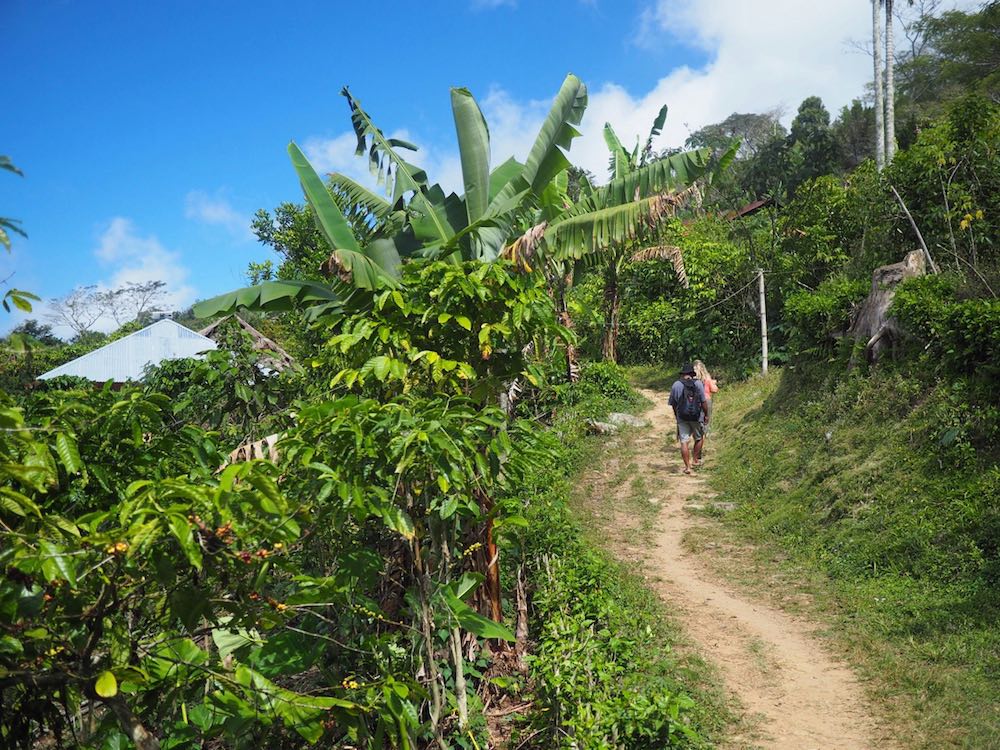 Our approach to Wae Rebo, on the other hand, was just glorious. With steep jungle-clad mountainside to our right, we caught a first glimpse of the incredible conical thatched houses that have been a feature of the village for hundreds of years.

Before we made our entrance, our guide steered us toward a pagoda overlooking the village, where he signalled our arrival by sounding a wooden instrument, which was a bit like a set of clackers we used to bash together in the 1970s. He then changed into a traditional sarong and hat before taking us down into the village. 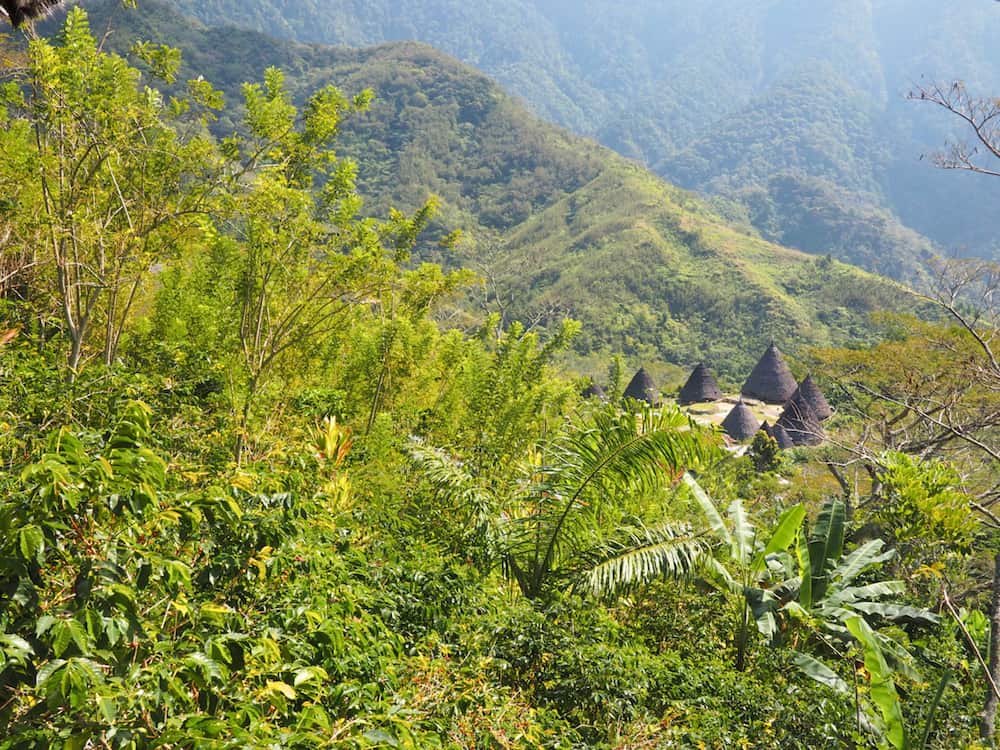 The village itself is a group of seven dwellings, including a specially erected one that doubles as a guest house for visitors. Our first task was to attend a welcome ceremony where the village elder, in a ritualistic ceremony, asked the village ancestors to welcome us as one of their “family”. Which, happily, they did – in return for a “donation” of 200,000 IR (£10) each. 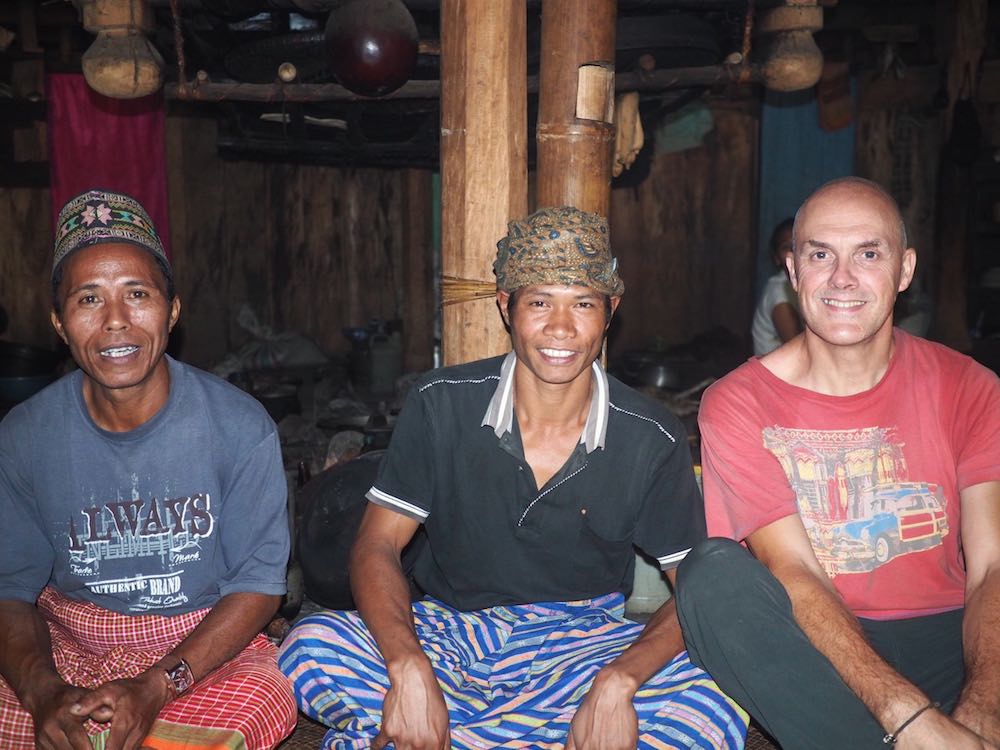 We were then free to explore the village, take photos and talk with the villagers. In the guest house dwelling, we made our way to speak to four women who we could see cooking in the kitchen at the back. In a room with hardly any light, the women were actually preparing our lunch, with large iron pots suspended over wood-fired flames. We sat for around 30 minutes, attempting to communicate with each other in a sort of English/Indonesian cross-over language. 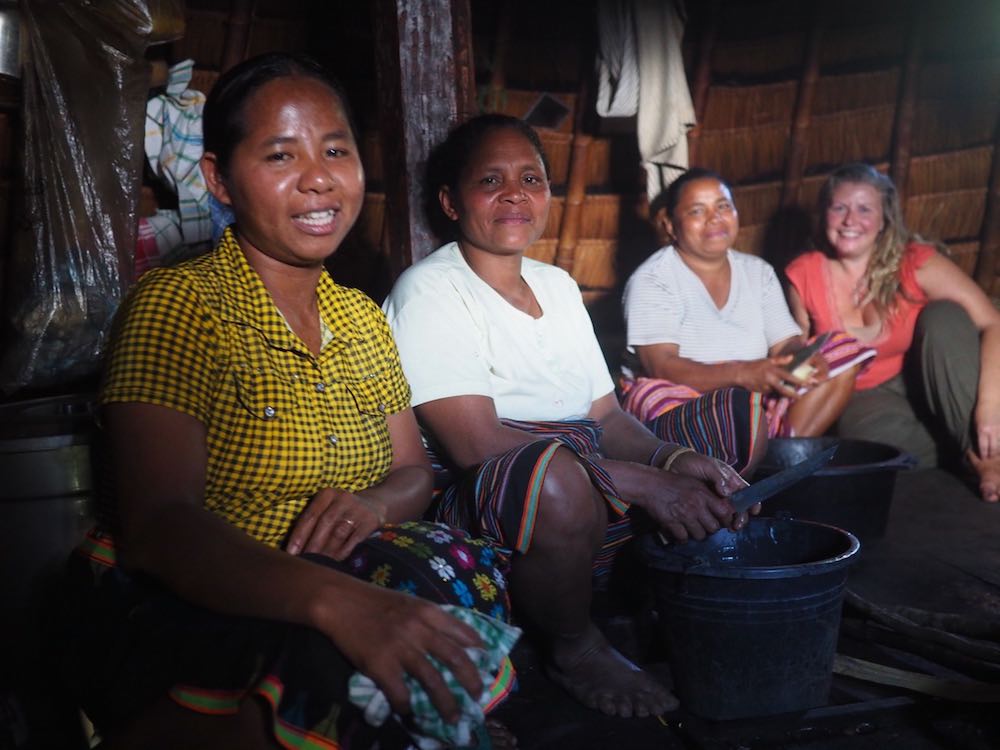 In all, we spent just over two hours there, including lunch prepared by the four ladies we’d met. Despite the arduous journey to get there, it was so worthwhile and an experience not many westerners have enjoyed. Don’t miss it if you are travelling in Flores. And if you fancied staying overnight in the village, the sleeping accommodation looked pretty good to be fair, albeit it was a communal sleeping area consisting of a circular row of hand-made woven mattresses and blankets. 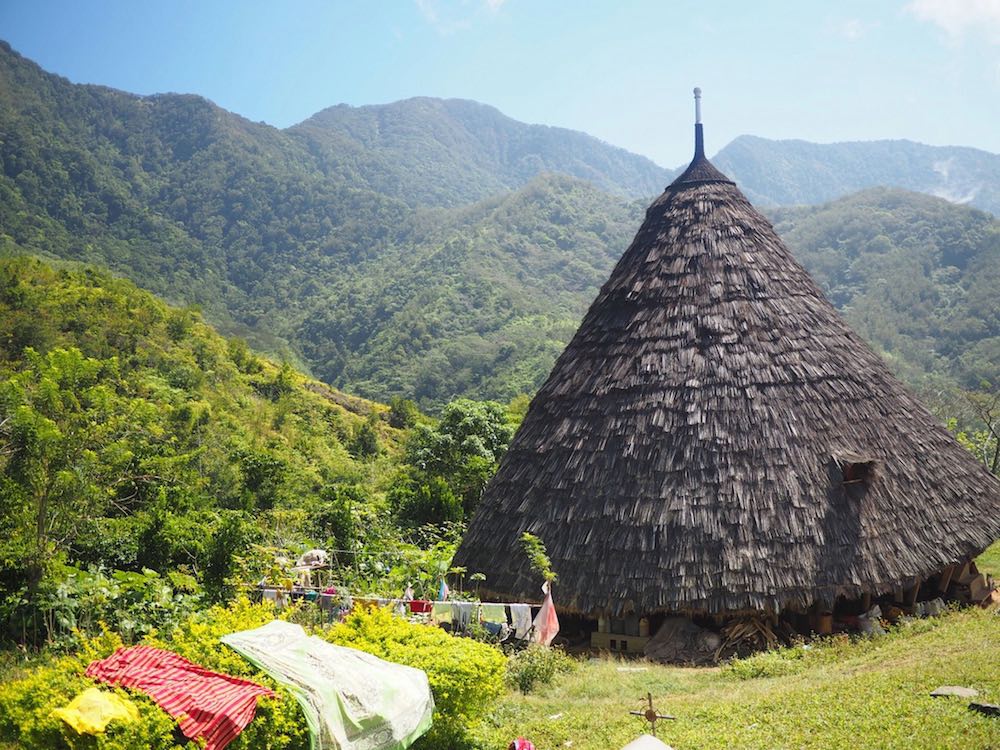 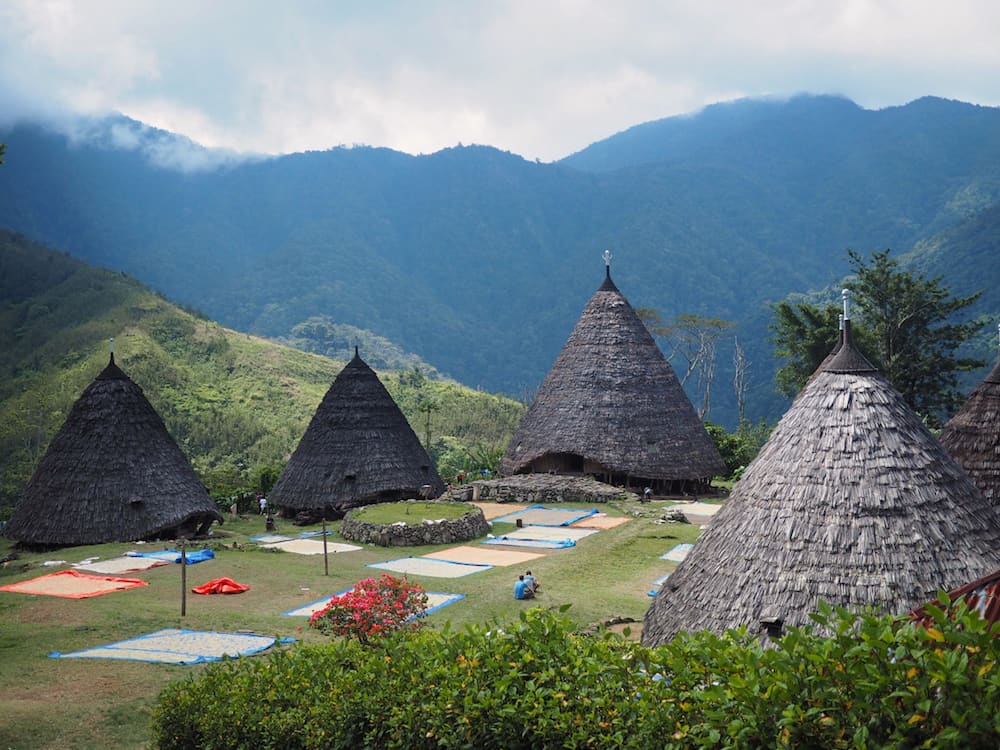 Our return journey to Ruteng

Not that our journey was over just yet.

Firstly there was the small matter of the return 9km journey downwards – which brought back some memories for me of my four-hour descent of Gunung Inerie.

Then there was the 20-minute ojek ride (they’re the motorbike taxis you’ll remember) down through the pot-hole strewn road from Denge back to our homestay. Again, lots of local kids cheering and waving at us – but I wasn’t waving back as my hands were tied in a vice-like grip to the back of the seat behind me.

Back at our homestay, it was time for the encore of the frog chorus (sleepless night #3), which was only broken at 4:30 am by the sound of incredibly loud Indonesian techno music. But this wasn’t a group of local party-goers on their way back from a night out. No, this was our 4:30 am bus ride back to Ruteng!! I kid you not, still half-asleep we (thankfully) climbed into the front cabin of the truck/bus alongside the driver, thus avoiding having to get into the back again, where the dials on the bass-heavy amplifier had very definitely been turned all the way up to eleven.

En route we stopped at regular intervals in the middle of jungle-shrouded nowhere to pick up mostly women with their small cargoes of bananas and other produce. It turns out that the truck was full of similar people who were on their way to earning a meagre income at a local market an hour or so away. Why on earth they needed to be subjected to Indonesian techno, and then soft rock, at frankly dangerously high levels is anyone’s guess. 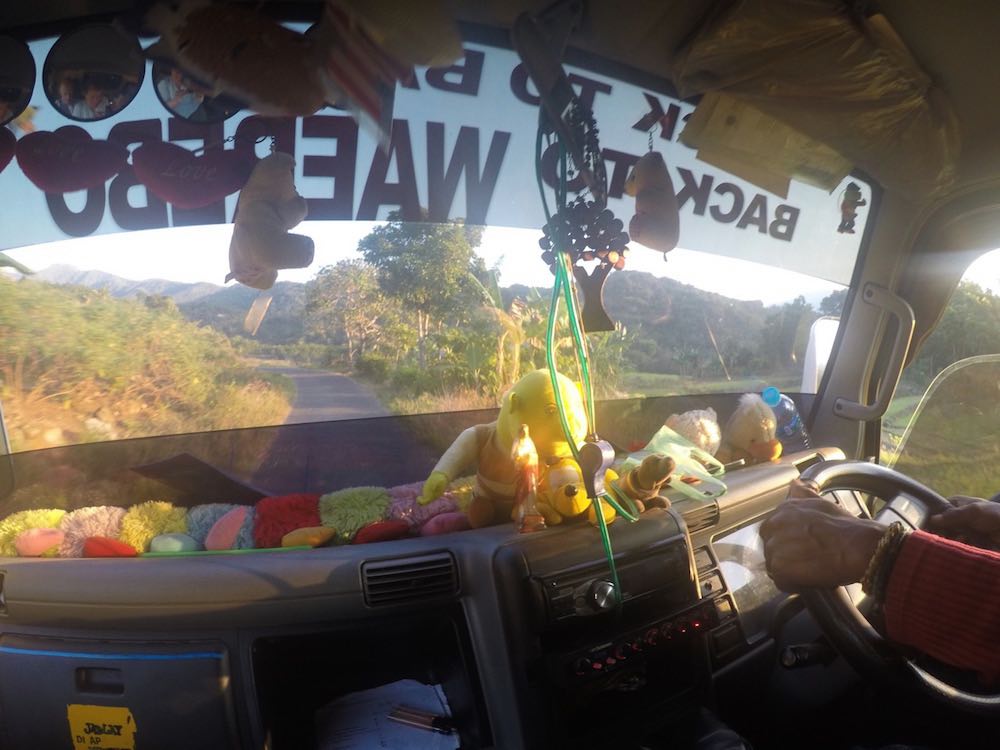 And so, nearly five hours later, we arrived back in Ruteng and to the sanctuary of Jofan and Yayuk’s welcoming home, tired and hungry. Yayuk was already teaching a classroom of IT students but, of course, broke off to prepare us some breakfast, which just happened to be probably the best plate of Nasi Goreng we’ve ever tasted.

We’d finally ended our journey to and from Wae Rebo, via a convent-cum-guest house, some of the most hair-raising and thankful-for-remaining-alive road trips we’ve ever experienced, and probably the warmest and most welcoming treatment of two absolute strangers anyone could possibly wish to receive. It wasn’t the most conventional of journeys by any stretch of the imagination, but one we’ll definitely be filing under “Life experience”.

Thanks again Jofan and Yayuk. If ever we can return the favour…. 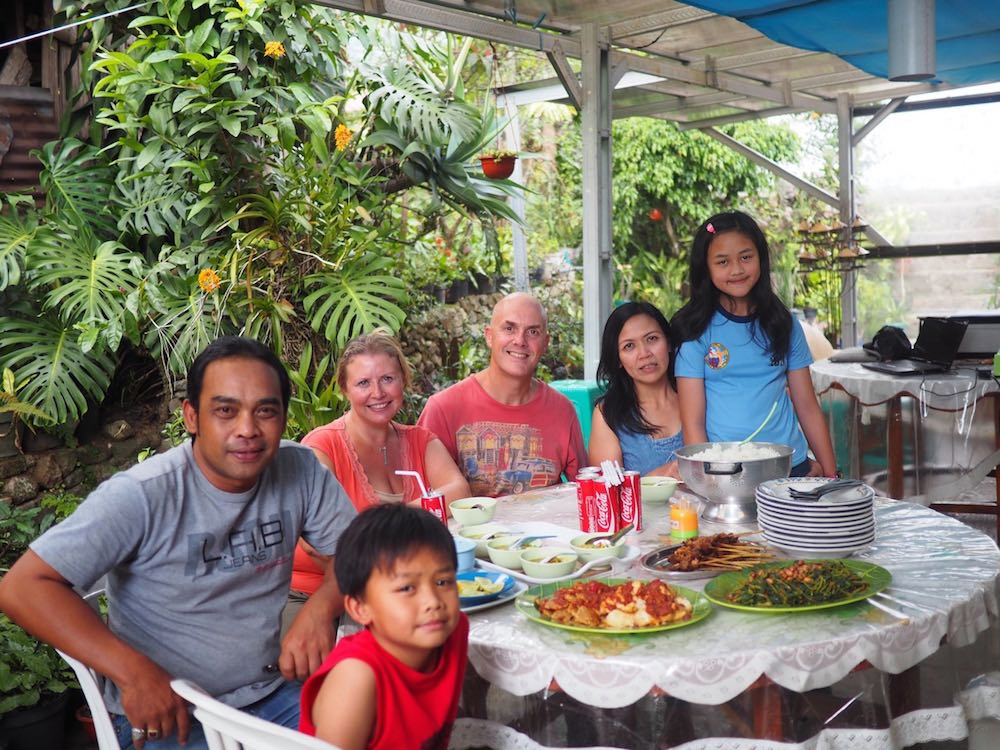 What did you think? Have you been to Wae Rebo? How did you get there and what did you think of it? Or maybe you’re thinking of travelling there soon? Either way, we’d love to hear from you so please add your comments below. 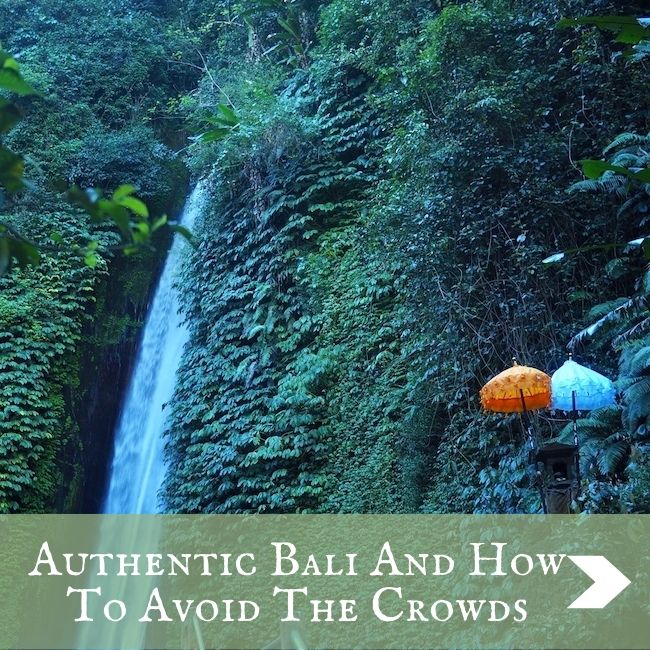 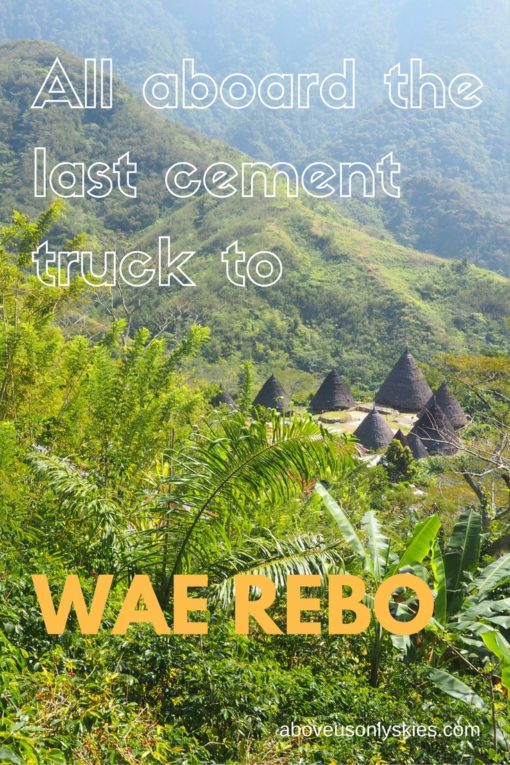 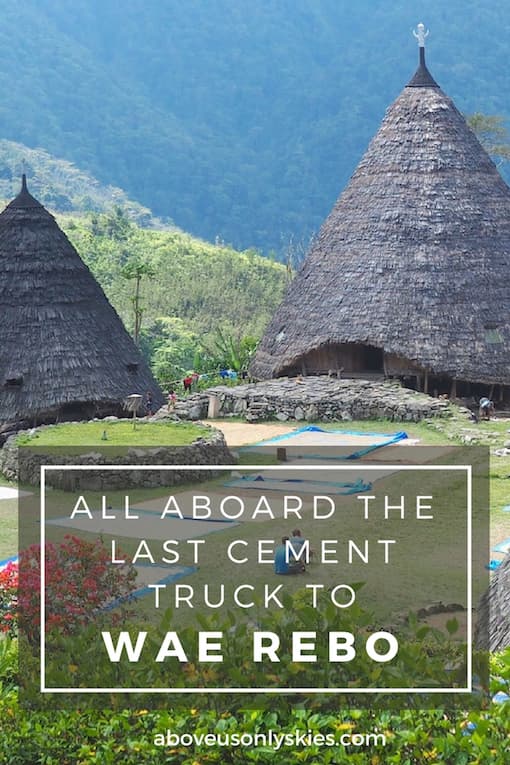