THE COMPLETE SKAGIT BREWERY GUIDE FOR THE THIRSTY TRAVELLER

THE COMPLETE SKAGIT BREWERY GUIDE FOR THE THIRSTY TRAVELLER 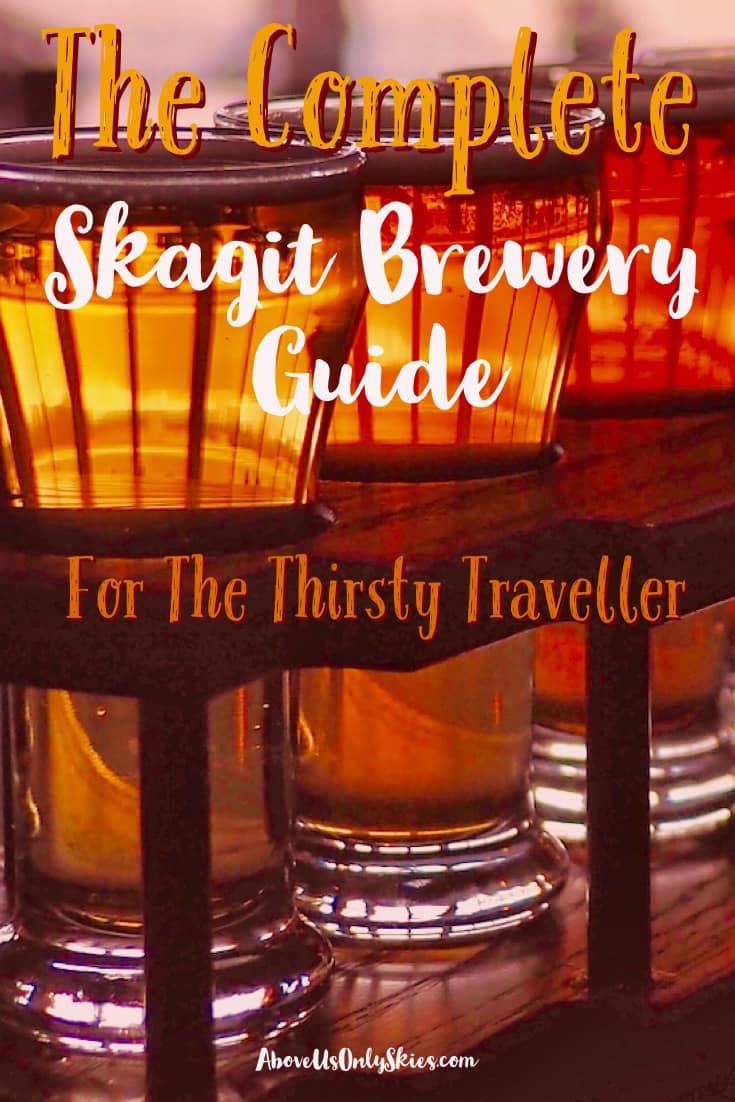 To our surprise – and enormous delight – the craft beer scene in the USA is as good as everyone seems to suggest. And, to be honest, having spent the winter months in rain-soaked Skagit County, up in the far north-west of Washington State, the plethora of craft beer breweries on our doorstep has been a major positive.

That’s not to say that the region’s production of wine is to be sniffed at either. But, having long-thought that American beers were defined by mega-corporates and the occasional usurper such as Anchor, Sierra Nevada and Blue Moon, it’s been something of a revelation to discover such a localised and quality-driven beer scene.

Better still, the breweries themselves provide their own taprooms where the full range of their beers can be sampled. Either via the long route (working your way through a pint of each one) or the short route (by buying a flight of one-third pints ranging from six to nine beers).

Now it’s possible that you won’t have as much time as we had during your visit to this beautiful part corner of the world. But hopefully, you’ll have the opportunity to at least try one or two of the breweries in the area.

And if you do, our Complete Skagit Brewery Guide might just become your new best friend.

Skagit County’s oldest brewery and something of an institution in the area’s tourist hub of Anacortes. The brewery itself is sandwiched in between two companion businesses – The Rockfish Grill and H2O (a music and dance venue). Which makes for a very long Friday or Saturday if you’re in the mood for it!

The beers available are constantly changing, even though there are 16 taps on display. And don’t be surprised if the odours from the brewing process occasionally find their way into your nostrils – as they did on our first visit.

Don’t miss their weekly cask ale offering, which for us was an unexpected reminder of home (in addition to the drizzly rain, obviously). Happily, it was excellent on both occasions I tried it.

Elsewhere, their (award-winning) IPA is terrific but there are so many others to try out, with a particular leaning towards British and German styles – their Highway To Helles (geddit?) being a standout. 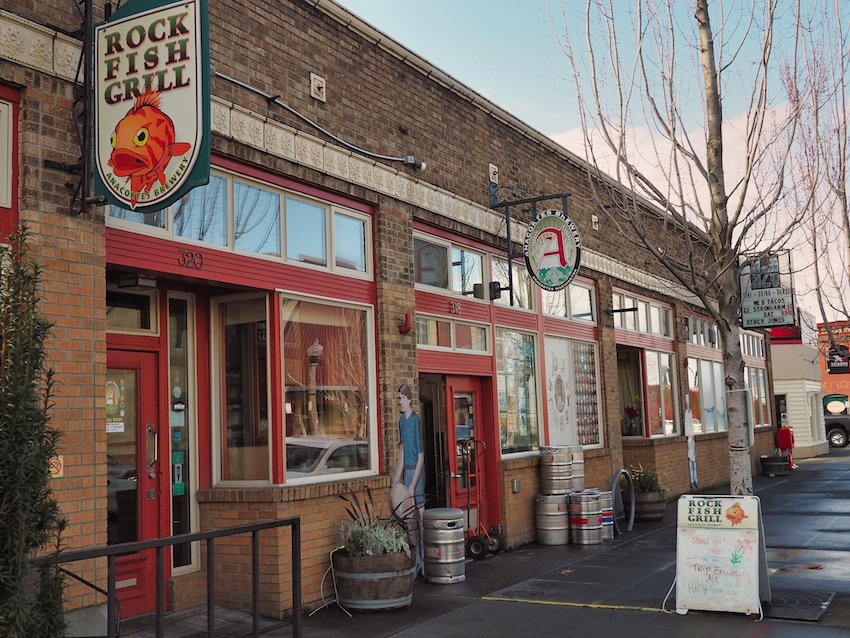 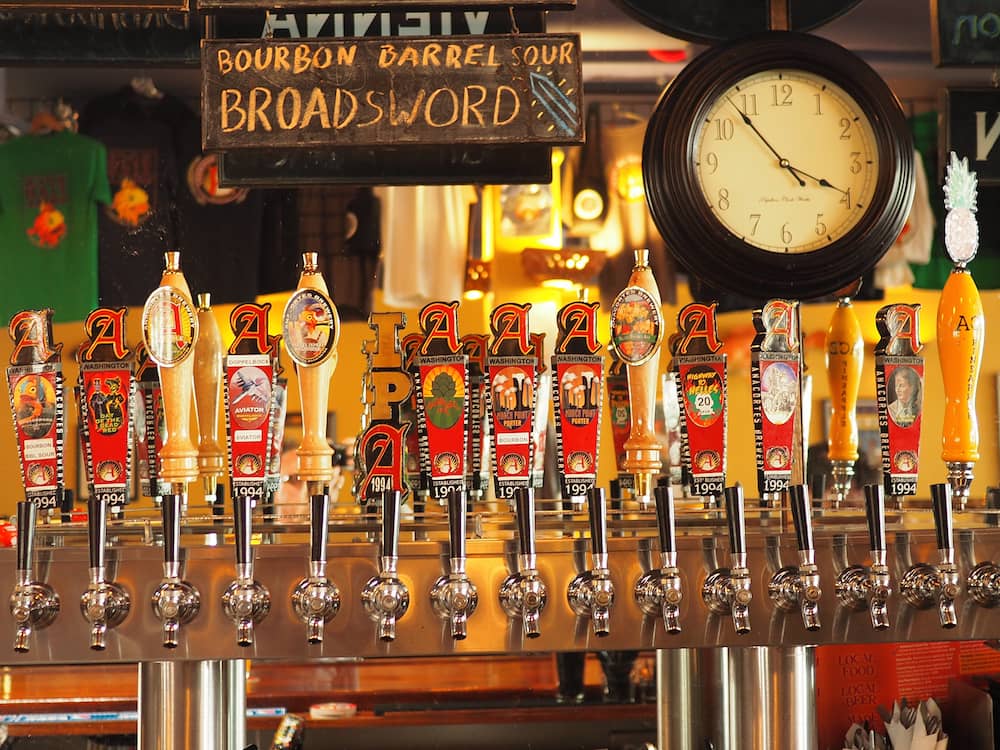 The ever-changing range of beers at Anacortes Brewery

Despite its peculiar location – behind a gas station off the main Highway 20 that links Anacortes with mainland Skagit County – Bastion benefits from a sizeable volume of passing traffic, especially during the summer season.

And if you like the sound of sampling a craft beer or two while you watch the brewer actually work on his next masterpiece then this is the place for you. That’s because the seven-barrel brewery and taproom sit happily together in one space.

The seating area has something of a diner feel about it but the beers on offer are impressive. Try the Sky Pig Hazy IPA (7% ABV) if you like your IPAs without too much hoppiness. Or even it’s bigger sister, the Space Pig Double IPA (8% ABV) if you’d rather have your hops not only tickle your taste buds but wrap themselves around your throat for good measure. 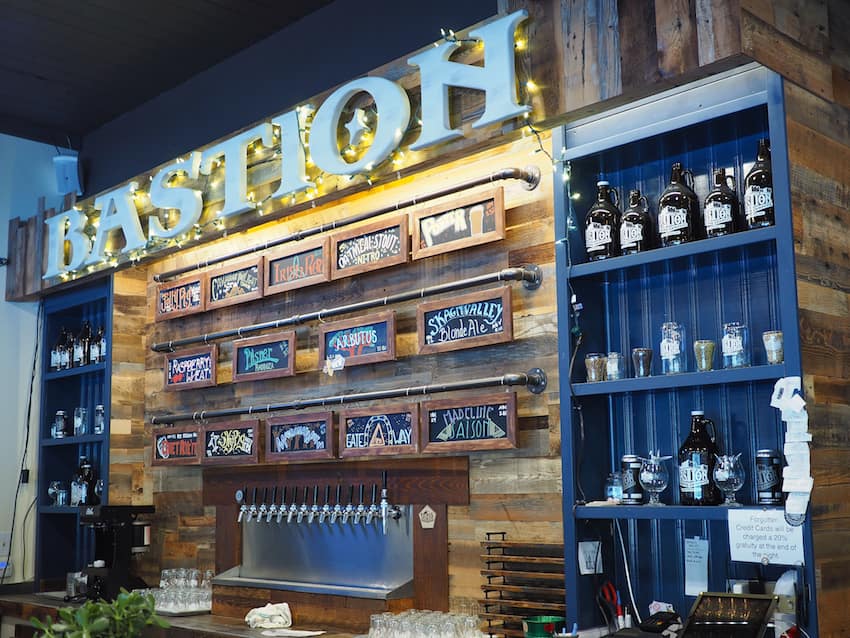 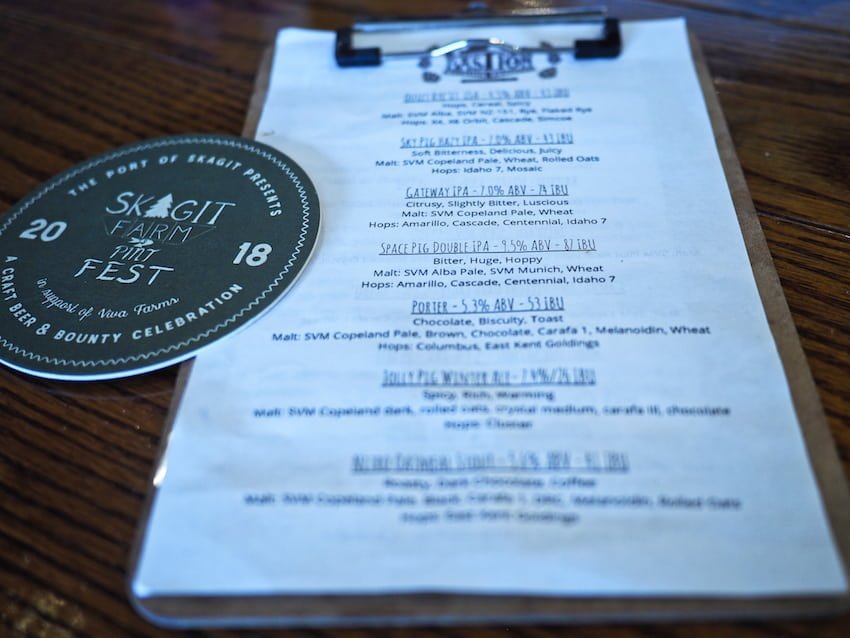 Somewhat detached geographically from the other breweries in our guide, Birdsview is none-the-less a worthwhile visit. Especially if you’re exploring what’s on offer along the North Cascades Highway (and you really should).

It’s a family-run affair, including a father-daughter brewing duo, and we found two of their beers to be outstanding. Firstly, Witless (6.5-7% ABV) is a Belgian Wit beer flavoured with orange peel and coriander. Better still, their best-selling Ditsy Blonde (7-7.5% ABV) is a lime peel-infused glass of thirst-quenching nectar. One of our Skagit beer favourites, for sure.

And, because of its gorgeous setting, the beer garden would be a great place to spend an hour or two on a warm, sunny day. 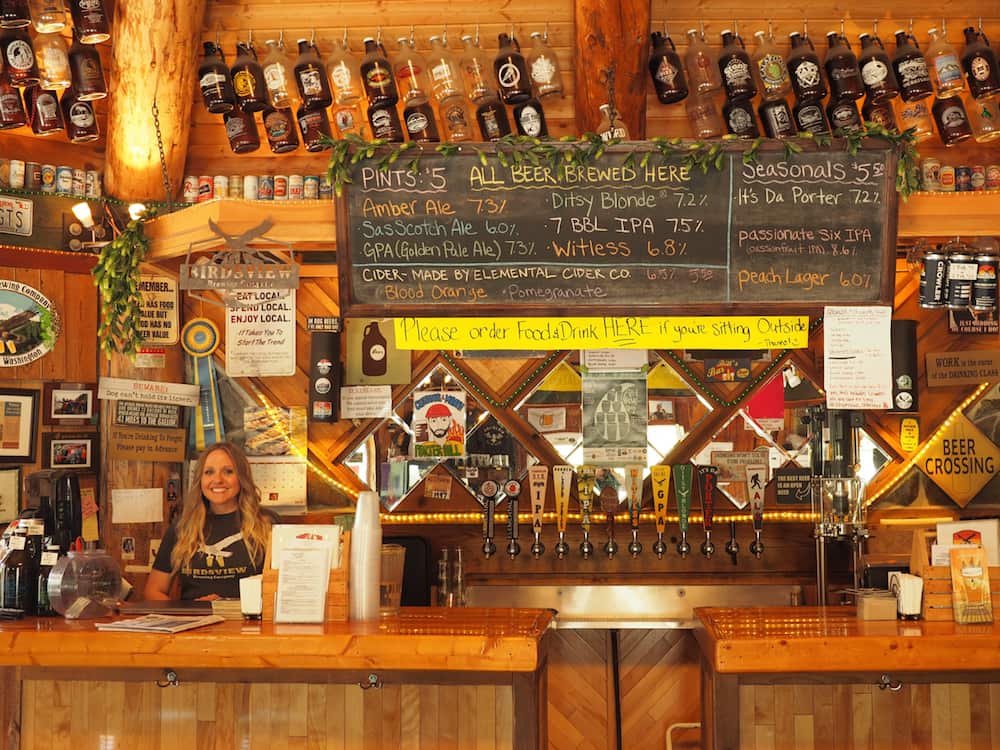 The bar at Birdsview Brewing

One of two Chuckanut locations (the original one is just a few miles north, in Bellingham), this multi-award winning brewery specialises in European-style beers. And as Europeans (albeit only just, what with Brexit’n’all) we can certainly appreciate a good British IPA, Irish Stout or Dunkel Lager when we find one!

Our favourite of all the taprooms in our guide, it’s a beautifully decorated colour-fest of blues, reds and natural wood. Add to that some uber-friendly service from behind the bar and the craft beer brewery experience, for us, is as good as it gets.

You can even bring your own food or buy your lunch from one of the visiting food trucks. 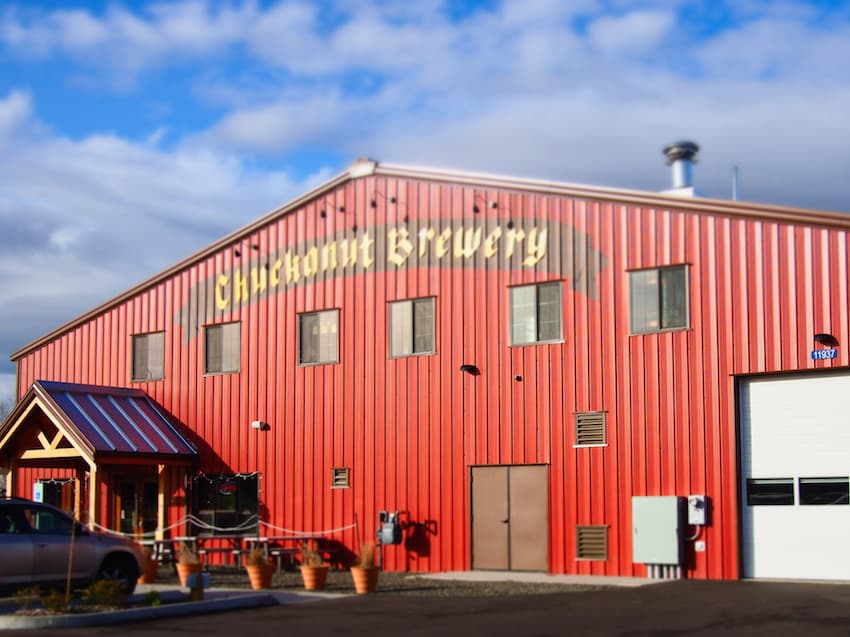 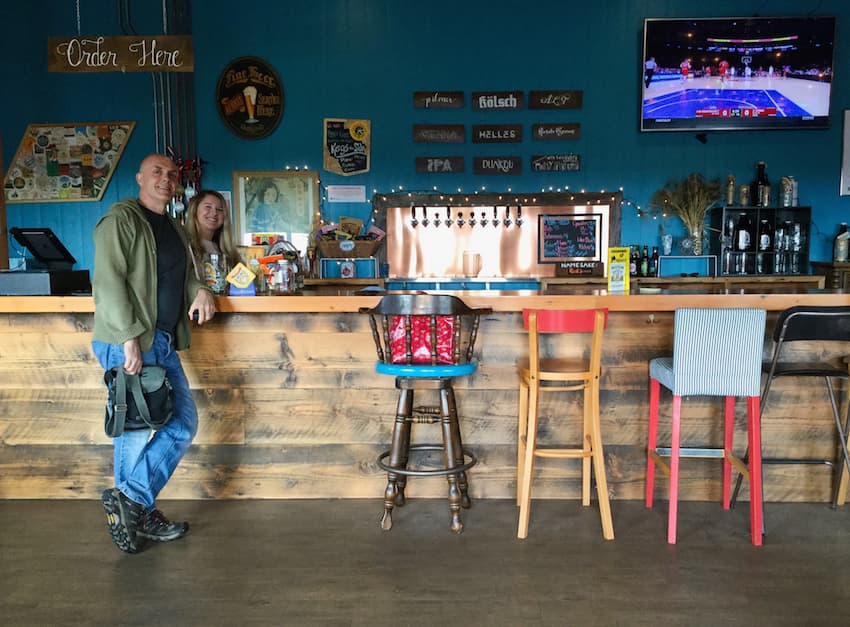 A brewery that came to our attention after a hot dog and beer “blind tasting” at the Union Tavern in Anacortes, during Skagit Beer Week. It’s fair to say that their cheesy, chilli-drizzled sausage sensation won a place in our hearts (via our stomachs) and has set the benchmark for any hot dogs we might come across in the future. And the beer wasn’t at all bad either!

The brewery’s taproom is what we’d call back home a “back-to-basics boozer” – with its high ceilings, standing room and the horseshoe-shaped bar.

Again there are plenty of European-style beers on offer, including the hugely quaffable and caramel-heavy Mt Baker Black Lager (4.9% ABV), based on the German Schwartzbier style. 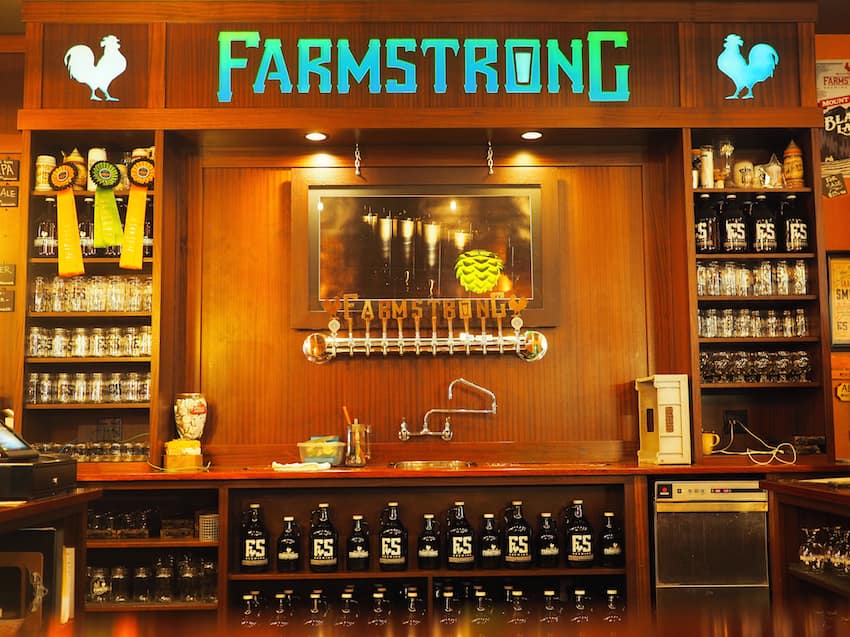 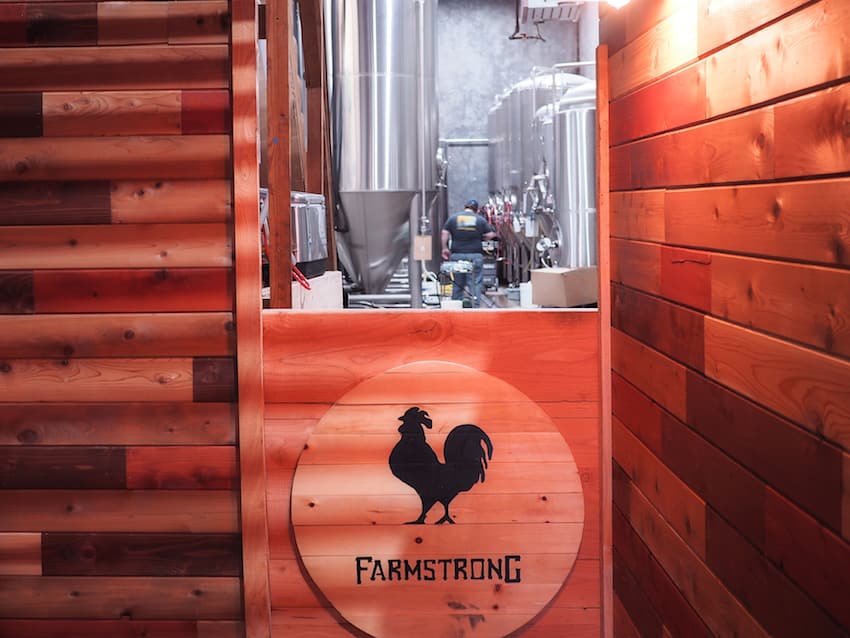 We couldn’t resist the aptly named Test Flight of six different beers accompanied by a plate of slow-smoked and flash-fried chicken wings marinated in Flyers’ Heat Seeker Hefe. Messy but so worth it!

Like nearby Chuckanut Brewery, this is actually the brewery’s second and newest location. The original is in Oak Harbour on Whidbey Island. They also feature brews from the nearby Cardinal Craft Brewing Academy. 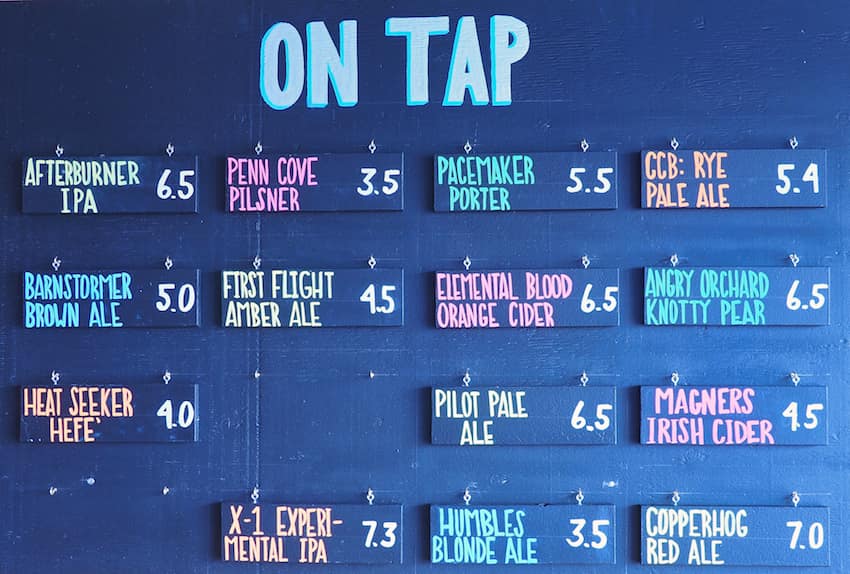 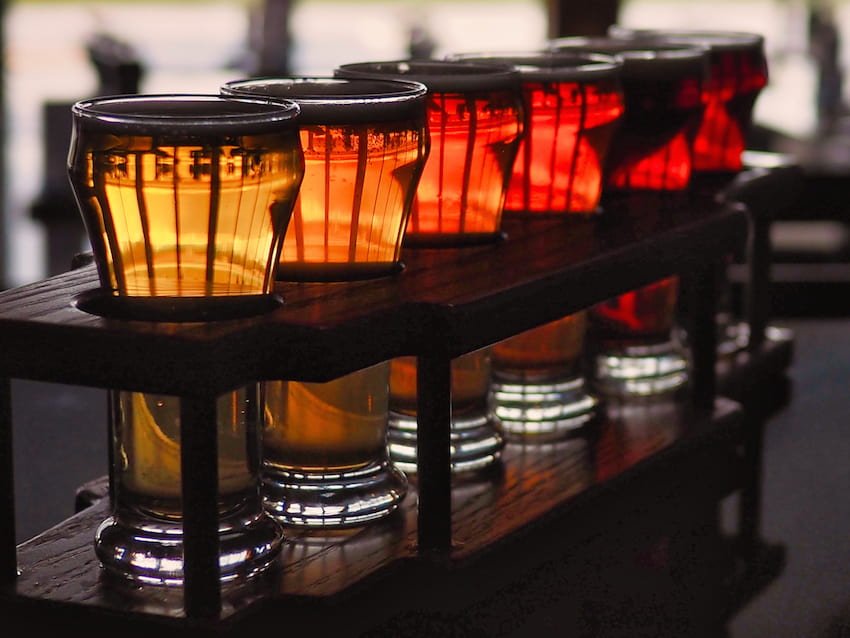 A flight at Flyers!

Situated in the historic town of La Conner, the brewery is a magnet for locals and tourists alike with its winning combination of aesthetically pleasing surroundings and good food (including wood-fired pizzas) to compliment its range of beers.

But, if the amount of customer traffic we experienced on a cold February day is anything to go by, we’re guessing it gets packed out during the warm summer nights and during April’s annual Tulip Festival, which draws in thousands of tourists to the nearby fields. 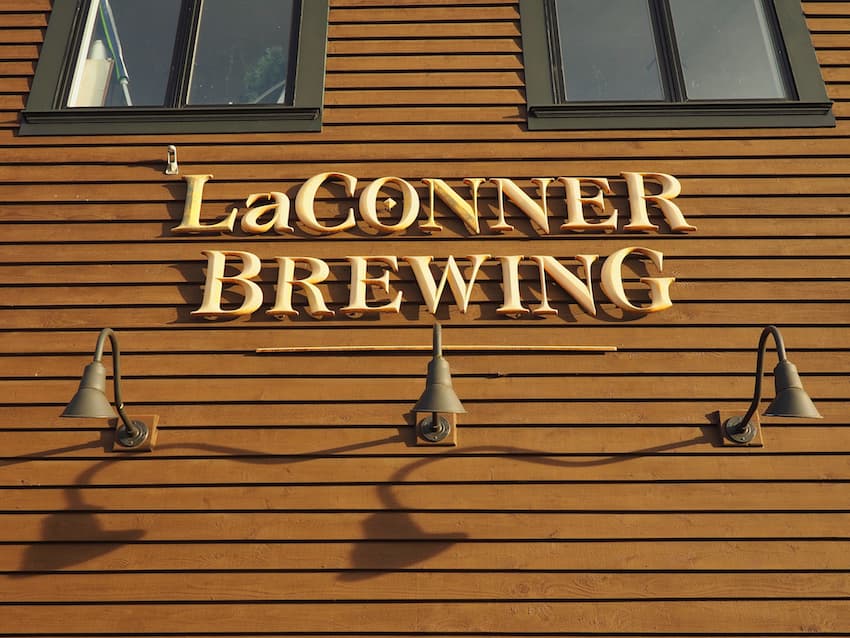 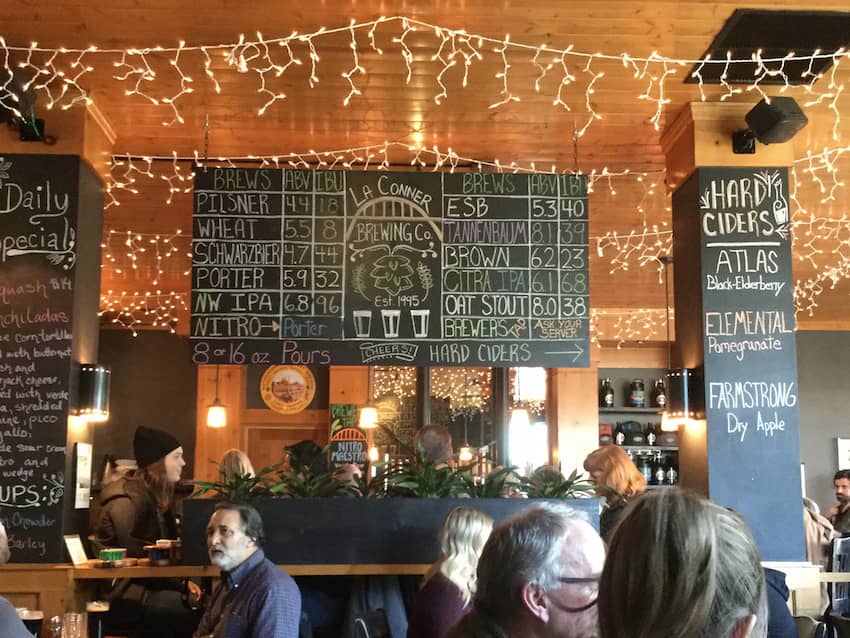 Specialising in unfiltered Pacific North West versions of UK and Irish style ales, North Sound is very much a community-based brewpub. As we discovered on our visit judging by the number of people who turned up and handed over their “growlers” to be filled up with their favourite liquid.

For the uninitiated, growlers are typically metal or glass jugs which are filled with beer at the brewpub and taken home for drinking. And there are some who take their growlers VERY seriously. In fact we watch open-mouthed as one guy walked in with one of these!

The brewpub itself has something of a split personality. There’s a long, narrow bar area with high chairs, which tends to get crowded when growler-clutching locals turn up in increasing numbers. But there’s also a separate, wider lower level with comfy chairs and large TV screen, which we’re guessing would be perfect for watching sporting events. 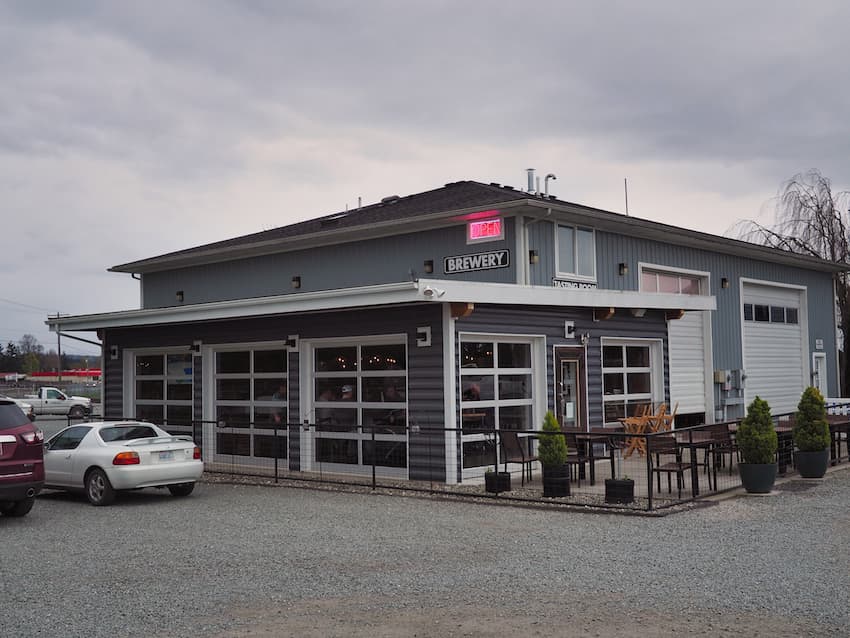 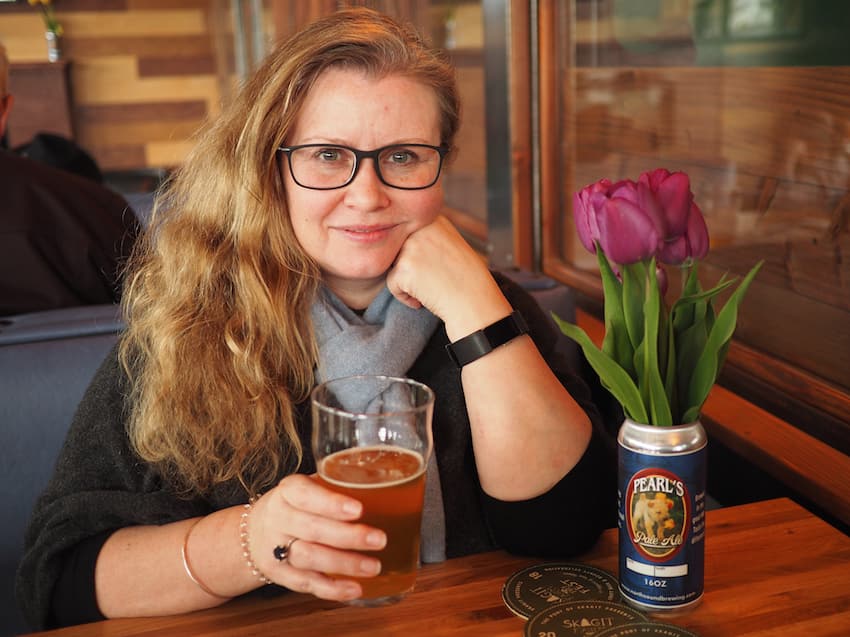 Nicky with a pint and can of tulips!

Probably the Skagit County brewpub that most reminds us of a typical British town pub. Located close to Mt Vernon railway station, it’s housed in an old character-laden brick building and boasts an old saloon-style piano at the entrance.

And, unlike the other brewpubs in our guide, it also features guest beers from other breweries. Including, when we visited, Ten Pin Brewery’s obscenely good Gutterball Hazy Pale Ale (5.5% ABV).

And, for those of you wondering what the hell I’m talking about, here’s a definition according to www.urbandictionary.com…

In UK slang, the “dog’s bollocks” means “the best”. It comes from the habit of male dogs licking their testicles (bollocks) and that they must taste good as they spend so much time in this activity. 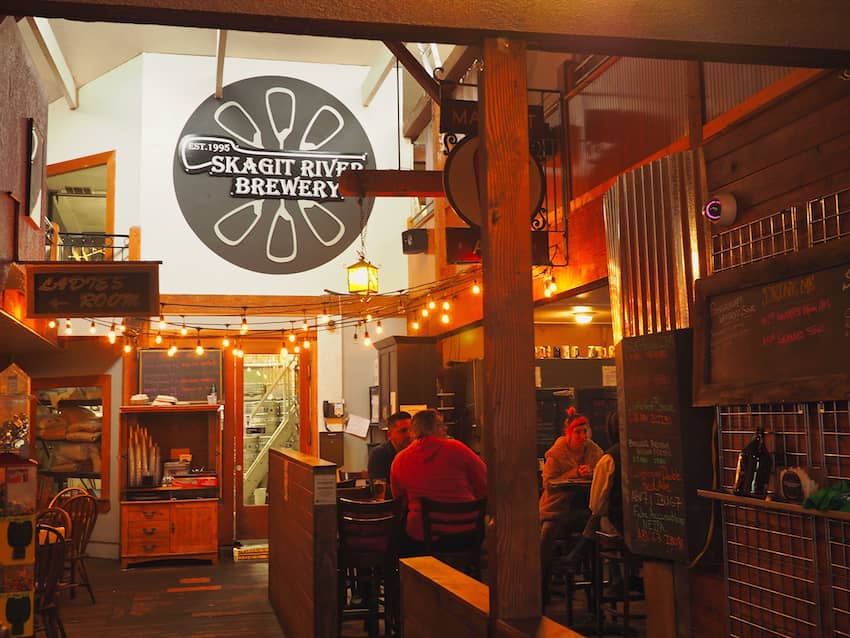 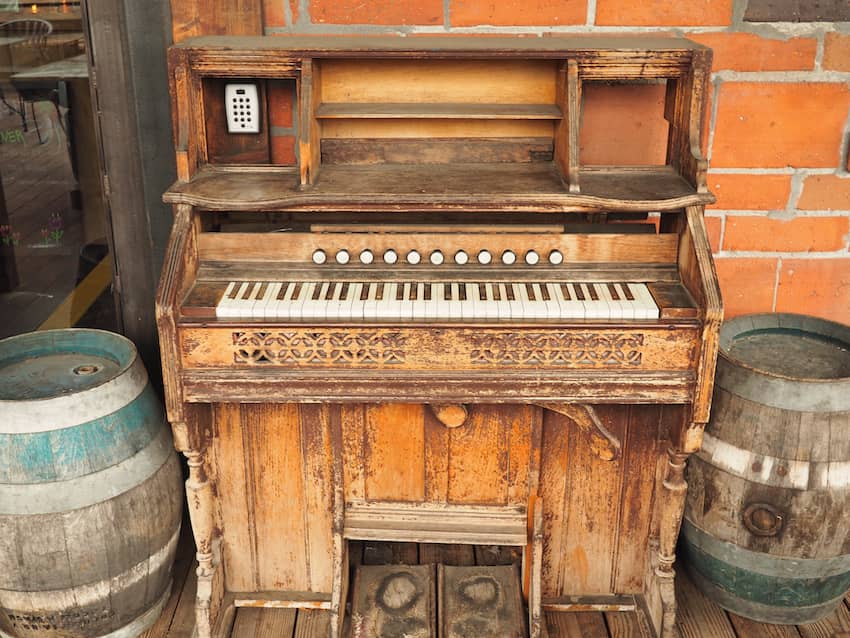 An antique piano sits at the brewery tap entrance

It’s no coincidence that there’s a distinct leaning towards British and German beer styles within the Skagit County breweries. In fact, Skagit Valley Malting has taken advantage of the area’s perfect barley-growing environment to produce malt that shares characteristics with North European varieties.

So, having access to such high-quality grain locally has enabled local breweries to market their beers under the Skagit Farm To Pint banner. And, to be honest, it seems to work as the Farm To Pint Ale Trail leaflet we picked up in Anacortes Brewery gave us the heads up for what was on offer and the desire to go out and try them all for ourselves.

One Skagit brewery we haven’t featured is Cardinal Craft Brewery in Burlington as their taproom was only open for a few hours once per week while we were there. But it deserves a shout out as it serves as a training academy for student brewers, who over the course of a year, are taught about the science of brewing from farm to glass. And if you can’t plan a visit when they’re open, you can always taste the fruits of their labour at nearby Flyers.

And finally, in addition to the Skagit breweries listed here, we can also heartily recommend two other pubs in Anacortes where you can try not only local beers but others from further afield in Washington State, too.

The Brown Lantern (412 Commercial Avenue) has been pouring pints in Anacortes since 1933 and its exposed brick walls are a cornucopia of sports memorabilia. But the new kid on the block is the Union Tavern (902 Commercial Avenue), with its sleek minimalist design, great range of local beers and to-die-for selection of hot dogs. 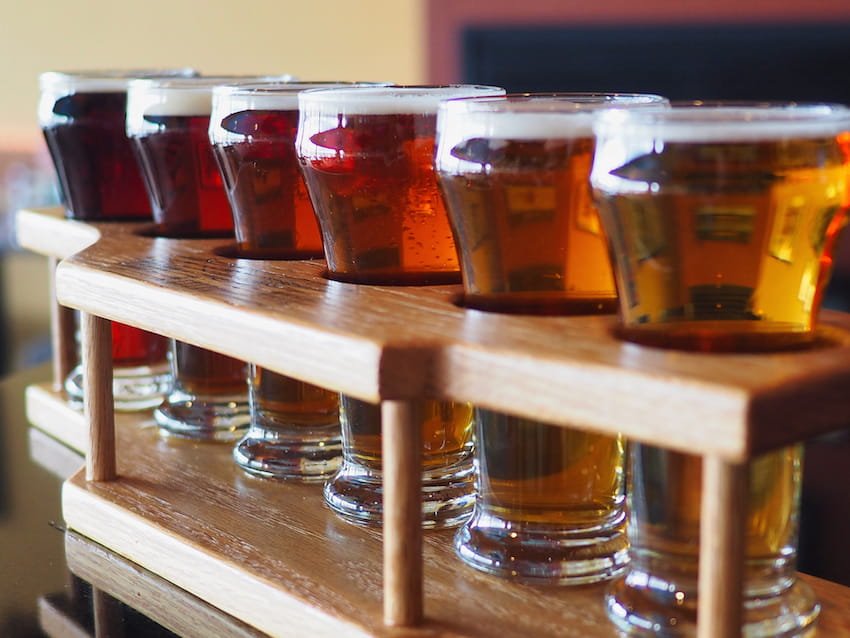 What did you think? Do you have a favourite Skagit brewery to share? Or perhaps you’re thinking of visiting Skagit County in the near future? Either way, we’d love to hear from you so please add your comments below. 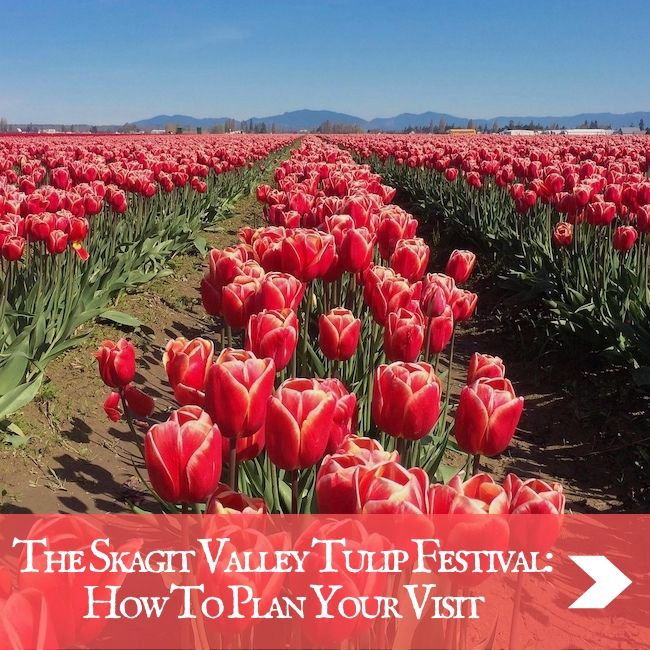 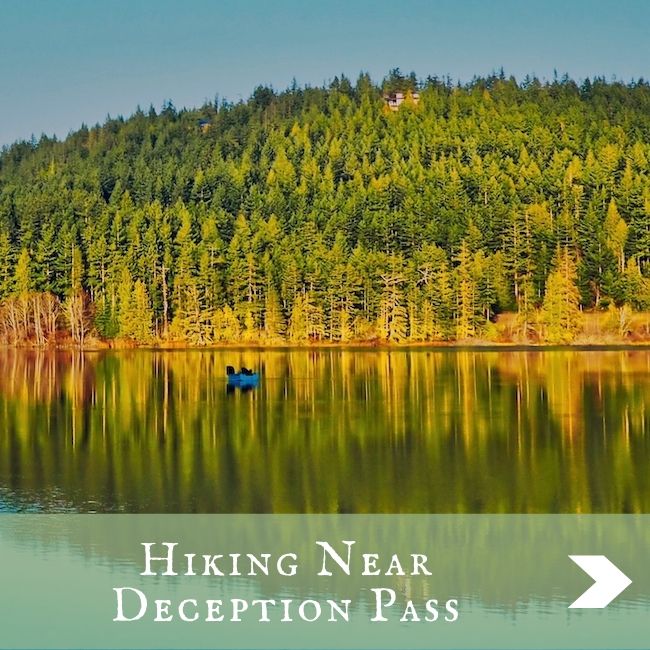 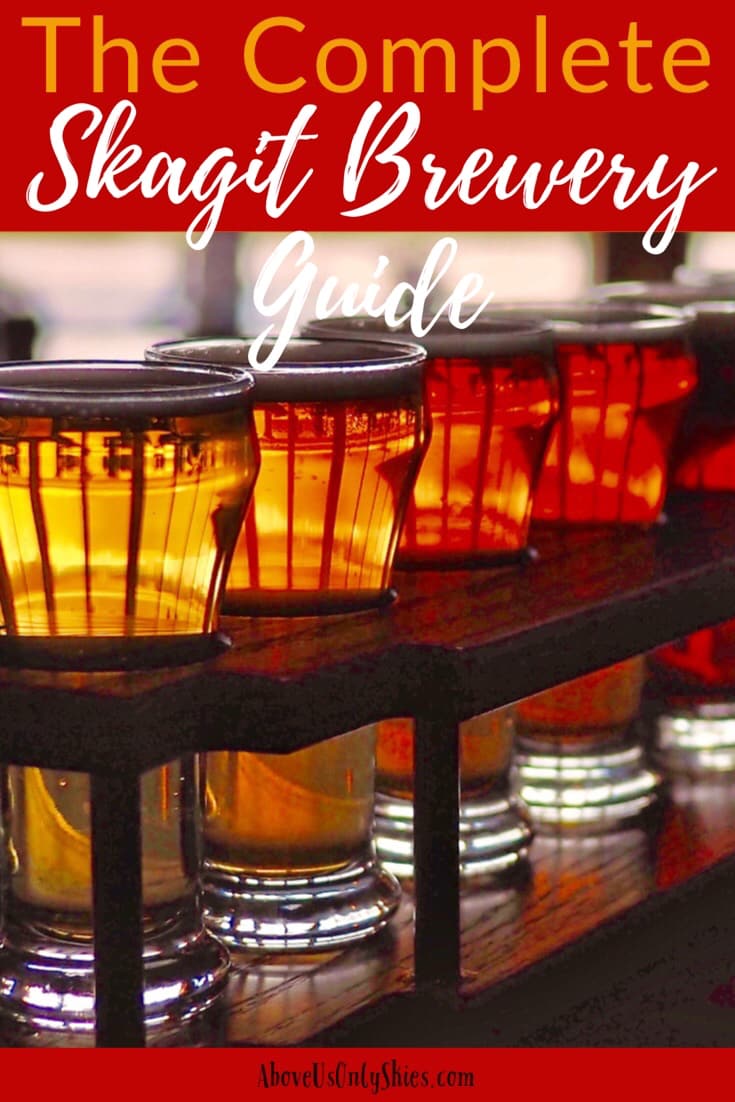 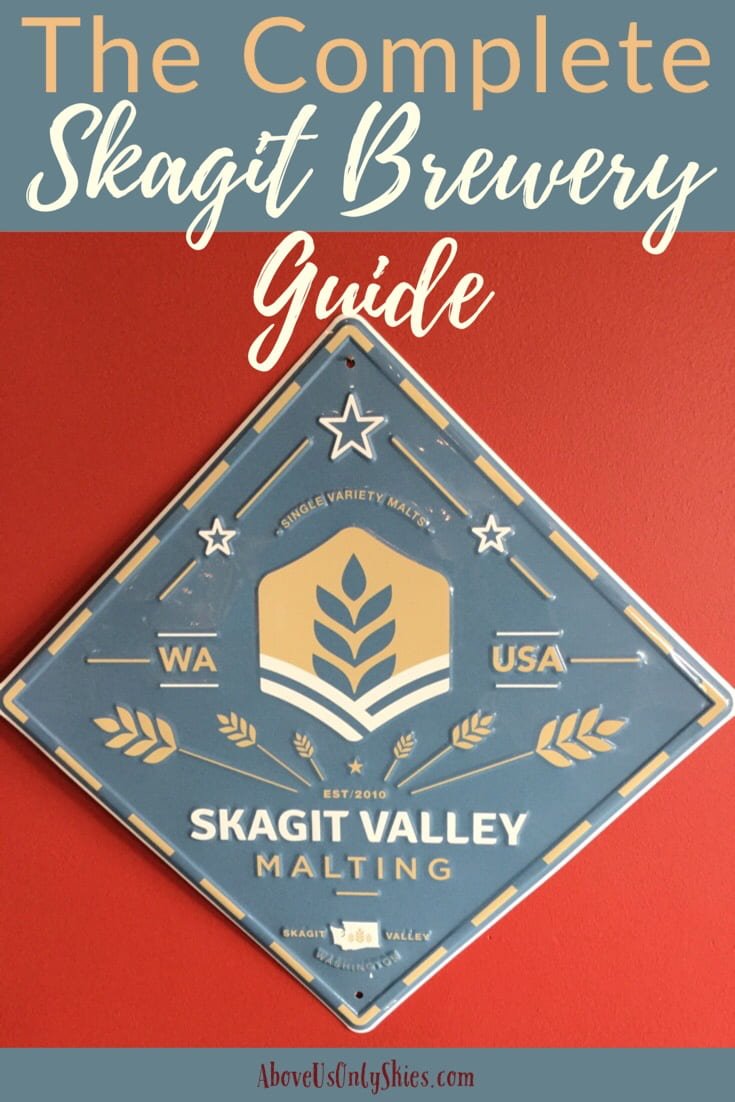 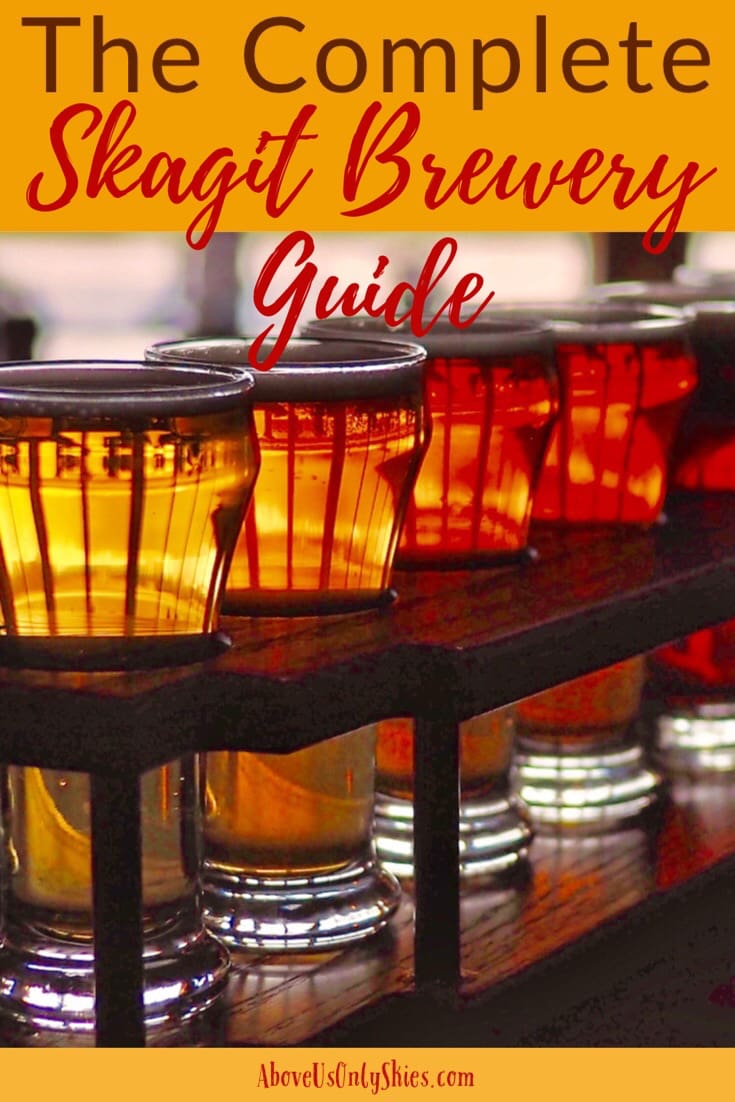